We know him as the latest villain in the James Bond film Skyfall, and as the bad guy in No Country For Old Men – but Javier Bardem has a long list of films and titles under his belt. His latest role is back in the bad guy arena, as Captain Salazar in Pirates of the Caribbean: Dead Men Tell No Tales a cursed Spanish captain who is after Jack Sparrow to find a way to break his curse. Despite our tendency to see Bardem in the “bad guy” roles, when we sat down with him to talk about his latest project – he was nothing but friendly, funny and kind. We were curious about what it took to make him into the newest antagonist in the Pirates universe and what drew him to the part.

Captain Salazar has a very distinct look – how long did it take you to get into makeup everyday?

Way less than it takes to you all. Three hours.

What was it like talking with the black goo coming out of your mouth?

They told me it was supposed to be like chocolate. It taste worse than that, so, and they was supposed to put it on the teeth. I said “give me that,” and drank it. I went to play the first scene, I think it was with Geoffrey Rush and it starts to pour out of my mouth and he was very disgusted. I thought it was like a rage pouring out, right? It’s not blood. It’s like the rage of the character coming out, like something more physical, like a bull. I’d always thought the character was like a wounded bull with the blood and moving like wounded and breathing like out of breath and with a very strong idea for revenge towards Jack Sparrow.

Did you find it difficult to portray the emotions through all of that makeup?

That was one of my concerns to see if my facial expression can go through the mask, but  they did an amazing job and once I had the mask on the face, I realized that I could express myself through it, which is important. Otherwise, your performance is killed by it.

One of the things that these special effects people have done so well in this movie is that they brought magic into the performance without killing it, like the hair, it’s fantastic. It doesn’t kill the physicality of the performance. 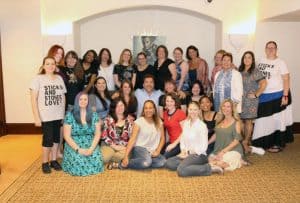 How did you become involved in the project?

I got involved back then, 2010, because Penelope was shooting “Pirates 4” so I went to the set in Hawaii, a beautiful place,  Los Angeles and London, and I was very envious. I was very jealous because I was seeing all this amazing production taking place, the water, the special effects, the boat, the sword fighting. I wanted to be one of those. So, I talked to Jerry [Bruckheimer], “Jerry please, give me a job.”

It was that easy?

No, I said that because I thought that he was going to say “yeah, right”, but then he called me five years after and I was so surprised and honored because as a movie goer, I love the franchise. So, I knew that production wise and experience wise it was going to be great. Now it was a matter of what’s the story was and what can I bring to the character. When they gave it to me, I thought it was this great thing about one same character played in two ways, 1) when he’s alive and it’s all about pride and it’s all about honor. And when he’s dead, which he’s like it’s all about betray and pain and revenge. I liked it. And it’s a Disney movie. You have to bring it up. It has some powerful moments, the movie itself.

Can you tell us what it was like seeing yourself after all the CGI was put in?

I was working a little bit on the darkness with this. Not with the makeup because the face was better but the hair. They showed me some pictures and videos and it was like, it looks great but how is it going to look like at the end?

Where was your favorite place to shoot during the movie?

The scene on the beach when they’re escaping from the sharks and I’m getting close to the shore, that was an amazing beach, a natural park called “White Sand Heaven” in Australia, beautiful. Crazy, the sand is so white and — but the rest was on the studio and when I saw the movie, it’s like I’d been on the sea forever.

You’ve played some pretty out there villains in the past, did you pull inspiration from previous roles or where did you find inspiration this?

I tried to see what’s the thing that makes them different from each other and I’m saying that I haven’t done so many villains. I’ve played three, which is “No Country,” “Skyfall” and this one, but I guess the movies are very powerful in their own genre. And they are different genres, being “Skyfall” and this one similar in  some ways because it’s a fiction world, fiction in the sense that if you play a villain in James Bond or here, you have to, as I said, before bringing it up a little bit because people are expecting that.

“No Country for Old Men” was a drier movie, a drier story and more yeah like rough. The only thing that I was inspired by was the idea of this wounded animal and also the idea that at the time, in those times, the Spanish army was very powerful in the seas and the captains were from the south of Spain. The south is where the flamenco is, the whole bull fighting culture belongs.  I wanted to bring some of that flavor into the character which for a foreigner it wouldn’t be that obvious but for a Spanish audience, I guess they will get a little bit of a glimpse into that.

You do a lot of artwork that’s really stunning, at the end of a long day do you ever go back and draw or paint anything that inspired you during the film?

I bring my own sketches and not because I want to impose that but it’s how I see it, and then of course somebody that draws better than me just does it. But, it’s like actually I studied painting and I wasn’t very good at brushes. I was more into the pencil and the ink.

I’ve always been drawn into faces and bodies and expressions so I guess that’s why I’m an actor. Rather than landscapes or motorcycles, I draw people’s faces, so I’m good at that and I like to bring that part into my process because it’s something that I imagine.

Have you tried that floating hair on your painting?

No, no, the floating hair was an idea that the directors brought and I thought okay, but what do you mean, floating hair, like that? Like a troll? No, no, then little by little, they were bringing all these drawings and concepts and I was amazed by it. I said yeah, sure, and I didn’t draw that.

Bardem embodies the role of Captain Salazar, and you can physically see the rage and revenge his character wants. See more when you see Pirates of the Caribbean: Dead Men Tell No Tales in theaters next week! Grab your rum, and check out the movie in theaters – where you can see the full effects of the amazing CGI and a fantastic story. 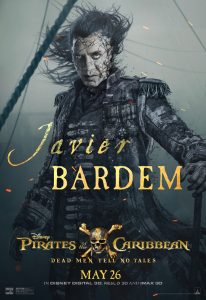