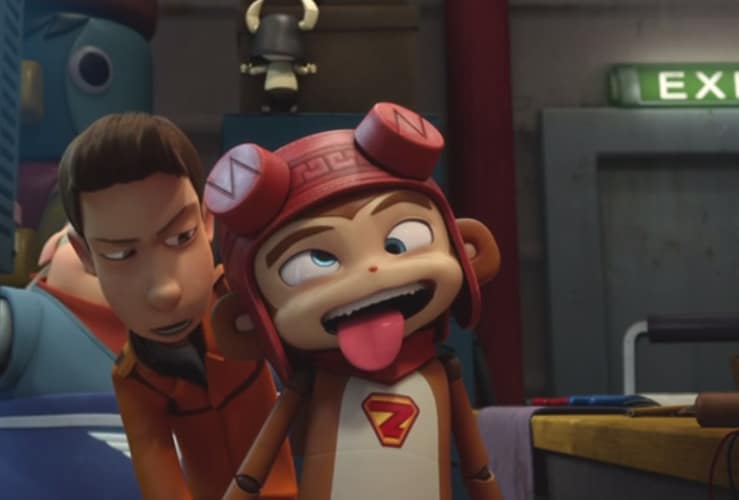 Most people know Jason Mewes from his role as Jay, from Jay and Silent Bob. In our house, he’s an actor we both know and enjoy watching in movies like Mall Rats, Clerks, Dogma and more. But in recent years, Mewes has broke into doing voice over acting and is now staring in Bling, a Momentum Pictures movie along side Tom Green, John Heder and Taylor Kitsch. Mewes plays Kit, a robot monkey super hero, much different than the roles we’re use to see him in. I was able to sit down and talk to Jason earlier this week about his new role and what he liked about this new project.

What made you want to do this role?

He’s a monkey and a robot. Honestly I’m a huge fan of monkeys and I like robots. the script itself is super funny, cute and fun. The character they were asking me to play, was the robot monkey I was super excited. All the toy stuffed animals, stickers and stuff I buy my daughter and myself are monkeys.

How do you relate to your character?

How would you get in the mindset to play a monkey robot?

Do a lot of robot dancing and eating bananas. Climbing trees in the yard. (laughs) I wish I had a fun process like that. For me it was loving monkeys and robots and doing the best I could.

Most parents will know you from your roles in the View Askew movies – what was has been or is your favorite character to play?

Favorite role in Kevin’s is Mall Rats. It is my favorite movie to watch and the one we’ve done. Clerks was our first movie, but it was 10 friends doing the movie, working during the day and making the movie at night. We went to work right afterwards not thinking anything of it. I didn’t know there was a process and it would go to film festival.

Mall rats was the first movie where we were put up in the hotel, and we got to work with Stan Lee who was my idol, and we had craft services. It was surreal. The whole couple months I had a blast, and every day it was “wow, I can’t believe we’re shooting a movie”

Have you done any other voice overs for kids movies?

I did Noah’s Ark with Michael Keaton. And I did a couple animations with this other woman Meg. I got to play and Egg with eyes -it sounds weird. I got to play a dog in another movie last month.

Todd and the Book of Pure Evil the Movie, we did two seasons in Winnepeg. It’s like 90210 meets Tales from the Crypt. The guy who wrote it and the producers made an animated movie. You should check it out.

Do you prefer voice acting over traditional acting?

No I feel both have their pros and cons, I enjoy both of them. There are things I really like about the voice over and cartoons, and there are things from putting on clothes and prosthetic. It’s also fun doing animations because you can come to work in your pajamas and not shower. Just keep going and going. Just watching the voice come alive

What is your most memorable moment from making Bling?

I get to go into the stage and have a set time length. Things were moving fast, it was just me having fun in there. The director giving me feed back. It was a while ago now, it’s been a couple years or so when we did the actual recording.

Bling is now available on Google Play for Free! You can download the movie to enjoy over and over again with your kids. Check out the trailer for the film below: