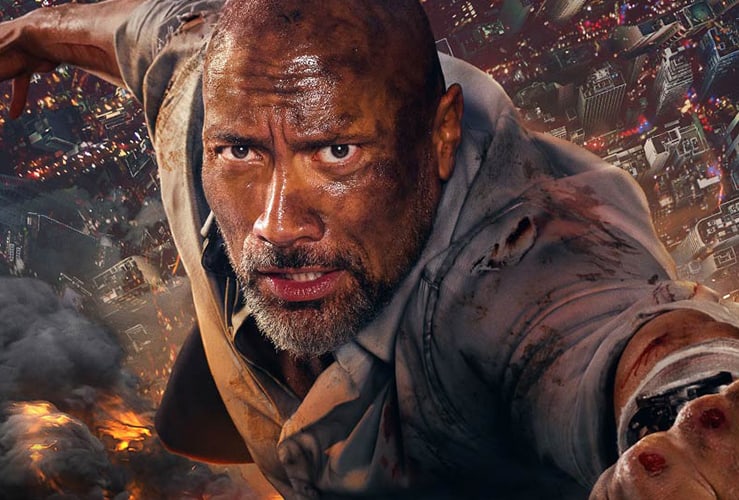 It doesn’t take much to convince me to go see a movie with Dwayne “The Rock” Johnson in it, I’m sure there are a lot of women that will agree with me on that. His roles are always genuine, gentle and he’s not bad on the eyes. And his role in his latest movie Skyscraper isn’t any different. Johnson plays Will Sawyer, a former FBI Hostage Rescue Team leader and U.S. war veteran who not only is in a battle for his own life, but with time to save his family from a burning building filled with bad guys.

On the surface, Skyscraper is a new action film with some of our favorite stars in it. We see Neve Campbell as Sawyer’s wife and the mother of his children, who in all respects can hold her own as a former service member herself. With adorable children in the roles, a decent bad guy and some amazing action scenes. But while watching the movie, I couldn’t help seeing the similarities to the Die Hard movies that are still my boyfriend’s favorites (especially at the holidays.) We have a male lead who has former authority training, on a quest to save his family from a building filled with bad guys (albeit much taller in this version). Even the leads seemed similar with mercenaries with thick accents – however Hans Gruber may have a lasting impression compared to the bad guy in Skyscraper.

Is Skyscraper just a new version of Die Hard? In some ways, there are similarities, but the movie can hold its own.

Skyscraper is a good action movie, with moments that will have you holding your breath. Double crosses, and some amazing technology. Sawyer is an amputee and the depiction of his injury, how he deals with it is handle with sensitivity. The connection between Sawyer and his family is genuine and you can see that Johnson poured his genuine emotions into the relationships with the children.

Early on in the movie, we were able to figure out who the bad guys were going to be. There are parts that are predictable and a bit campy. They are often broken up with a quick moment that causes you to laugh, but others you can see coming a mile away. There are a couple scenes that techies will look at and immediately question, but for the sake of the movie let them go by.

This  is a warning for anyone who is afraid of heights or suffers from vertigo. The high heights over Hong Kong, simulated or not were a bit too much for me and several other viewers. Some moments were so bad I actually had to close my eyes. I even left the theater dizzy, which the sensation didn’t leave for a couple hours after we returned home.

Even with all that said – Skyscraper is a fun time at the movies. While it is similar to Die Hard in the most basic format – Johnson brings a different element to it with his overall like-ability and personality. Some of the action parts are absolutely worth seeing in the theater. If you don’t have issues with heights, you will love seeing Skyscraper in theaters. Yes, it’s a fun movie for a date night, the guys will like the action and most likely the ladies are just there to see The Rock anyhow.

Skyscraper is in theaters everywhere on Friday July 13th. 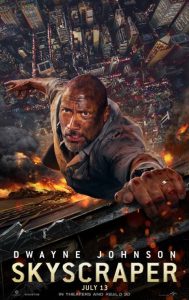 Global icon Dwayne Johnson leads the cast of Legendary’s Skyscraper as former FBI Hostage Rescue Team leader and U.S. war veteran Will Sawyer, who now assesses security for skyscrapers. On assignment in China he finds the tallest, safest building in the world suddenly ablaze, and he’s been framed for it. A wanted man on the run, Will must find those responsible, clear his name and somehow rescue his family who is trapped inside the building…above the fire line. Starring Dwayne Johnson, Neve Campbell, Chin Han, Noah Taylor, Roland Møller, Byron Mann, Pablo Schreiber, Hannah Quinlivan. Directed by Rawson Marshall Thurber. (UNIVERSAL) This film is rated PG-13.