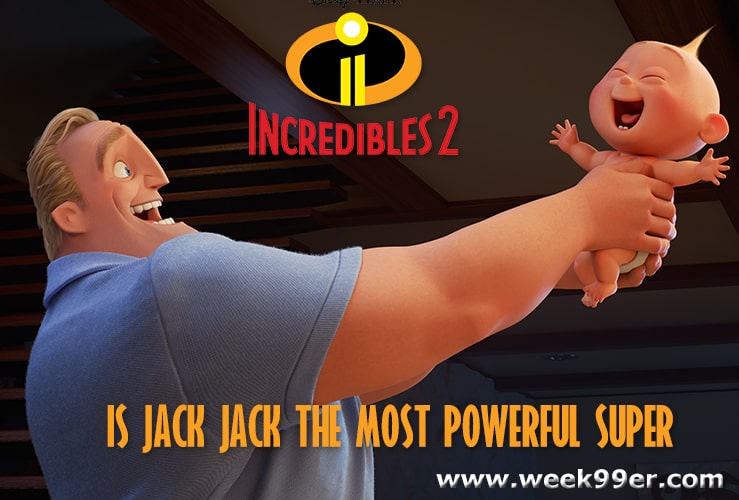 Admit it, you love Jack Jack! Not only is the character absolutely adorable but he reminds you of a baby in your life. He’s full of energy, one that you love but can wear you out in an instant, and one you still want to snuggle every moment you get a chance. We know what every one else in the Parr family’s super power is – but what about Jack Jack? What super powers does Jack Jack have? Is it possible that he’s the most powerful Super so far?

When we interviewed Director Brad Bird he explained a bit about the powers of the Parr family. “Their superpowers were based on iconic roles of men and women and children in the family. You know, the dad is always expected to be strong. The mom is always stretched in a million directions. Teenagers are defensive and insecure. So, she has force fields and invisibility. Ten-year-olds are energy balls that just, you know, can’t not be on — eleven or off, that’s what they are. And babies are unknowns.” Bird said. But fans of the original film know that we had a hint of what powers Jack Jack actually has.

At the end of The Incredibles when Syndrome is trying to kidnap Jack Jack we saw some of the powers the baby had. Including turning into a little goblin, a lead baby, and showed a bit of his temper. But if you had the Special Edition DVD with Jack Jack Attack short, where Jack Jack is being watched by Kari the babysitter, we see that he can light himself on fire, that he can change dimensions and definitely give a baby sitter a run for her money. We can’t blame her for handing over this handful to the “back up babysistter.”

How much more could that little bundle of joy have? Trailers show a few of her powers when they are finally reviewed to Bob when he’s watching him solo. But the second movie brings out so many other powers we didn’t know about including a full inferno baby. This is a power that animators struggled with making look right. It was a balance to make him look like he could bring fire to his skin without actually being in harms way. Another challenge for the animators was to make an effect they wanted to make in the first movie but the software wasn’t there yet – a goo baby. One that could change his physical state at his will.

Throughout Incredibles 2 we see more and more powers from Jack Jack. There doesn’t seem to be a challenge he’s faced with that he cannot handle. And definitely don’t make him mad! From a super sized Jack Jack, one that battles his greatest foe yet in the back yard and even can morph into people he loves (baby Edna might be one of our favorites!) The new powers will have you laughing through the movie and you’re never sure when the next one will pop up.

At the end of the movie Elastigirl is upset he has missed Jack Jack’s first power, and Bob answers “You missed his first 17!” We’ve been keeping track and haven’t quite seen 17 powers from Jack Jack yet, so hopefully we’ll see them in a sequel (we hope is in the works already).

So with all of the powers we’ve seen, and the few we haven’t just yet – is Jack Jack the most powerful super out there? We can’t say 100% for sure, there’s a chance he can grow out of the powers he’s showing now or focus on just one. But right now, his super powers protect him and entertain us at the same time.

His young age makes him a bit of a mixed bag, just like every baby. He’s full of potential, power and a bright future. And that makes him a pretty powerful Super!