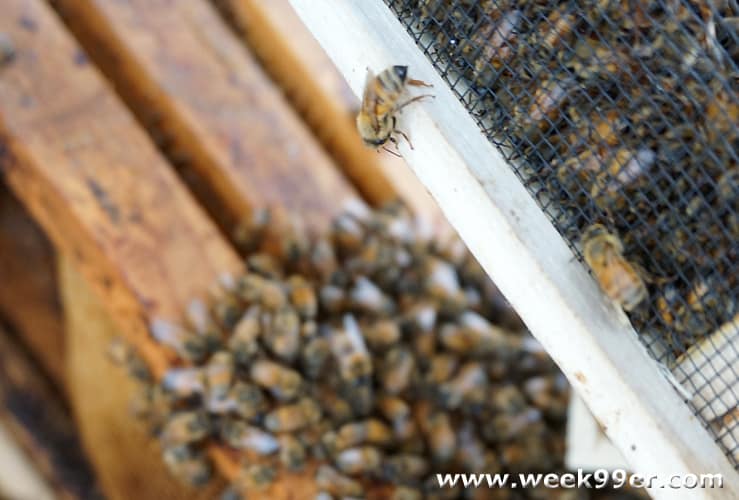 Today is a day I’ve been looking forward to – today we get the new bees for our hive. With the weather as up and down as it was last year and a couple other issues, the bees we had didn’t make it through the winter. While it’s disappointing, it tends to happen. So, a few months ago, I placed an order from a local apiary for a 3 lb box of bees. Just how many bees are in a 3 lb box? Oh, around 12,000 – that’s at least what they tell me at least! We also had a queen box and her attendants waiting to be freed. 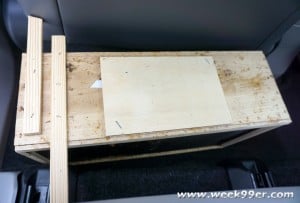 I have been watching the weather intensely the last couple weeks, and crossing my fingers, eyes and toes that it would be warm and sunny. Unfortunately, the weather in the Midwest didn’t want to cooperate with me. Today was low 30’s and snowing when I headed out to pick up our bee package. Snow in April isn’t unheard of in Michigan, but can be a problem for the bees who can’t survive in temperatures of under 40 degrees for long time periods. 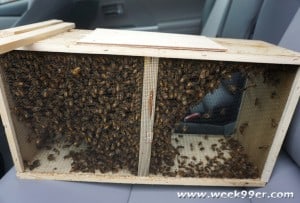 Installing a package of bees should be done a bright and sunny warm day. This allows the bees to go out on their navigation flight and explore their new home and surroundings. Nature didn’t want to cooperate, so I was give three options for installation: 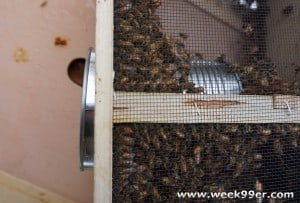 Option number 3 was pretty much our only viable option. I prepped the hive when I got home and left the bee box in the car. After bringing the bees to their new home, I had to actually free the bees from their cage. First was removing the feeding can which was mostly full since the bees were just packaged yesterday. The can was set into the hive on top of a free spot where I had removed a few frames and then I shook the box of bees to clear most of them out. Yes – I had to shake and hit the side of a box of bees, a few times to get the majority of the bees out.

Removing the Queen cage proved to be a little harder than I had planned because they had secured it with a strip of packaging straps. But once the cage was in my hands I used a small knife to remove the cork from the entrance and placed the box in the bottom of super between frames so they could easily get out in the heart of the hive. Since there were still some bees in the box, I placed the in inside in an open space so the rest of the bees can exit on their own time and join their sisters in the festoon to stay warm.

Despite what I tried, there were a couple bees that decided they wanted to hitch a ride on me inside the house. The first one I heard and didn’t know how to handle it. But our cat Jack decided they were going to be fun toys and we knew we had to get them out. It didn’t take me long to realize we had something in the house that would coax the bees – honey! I placed some in a glass and used it to trap the bees. They each enjoyed a little snack on the trip out to the hive in the (now) rain and rejoined the hive.

In a couple days the temperatures are going to cross 40 degrees and the bees will finally get to go out of the hive and explore what’s around them as well as find their local water source. Until then, we’re leaving them alone to huddle in and keep warm. But we’re happy the bees are here, and can’t wait to see how they are going to do this summer!