Growing up, the name Walt Disney held a lot of power. We instantly associate the name with the theme parks we know and love, and the movies that have helped shape generations. But it’s a rare thing to get a personal like inside his life and the place where so many of the classic Disney movies and rides came to life. 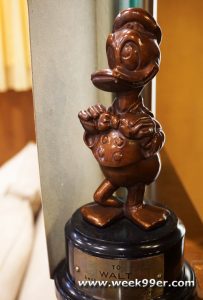 Inside the old Animation building at Walt Disney Studios in Burbank is the office of Walt Disney, where it originally sat. The office has been painstakingly recreated by the Walt Disney Archive team to honor the creator of the company. While in California last week, Disney allowed us to peek behind the curtain and see inside the office of the creative genius Walt Disney.

Walt Disney’s office, as mentioned before, was recreated to exactly how it was when he was alive. Shortly after the passing of Walt, the office was carefully document in great detail with photographs that the archivists used to recreate the space. A few items in the office and the connected rooms had to be rebuilt by the teams at Disney, but as much as possible, the room is is period accurate Art Moderne style featuring the sinuous curves and straight lines. 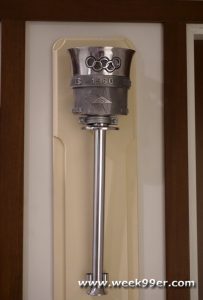 Walking into the office is like walking back into a point of history, and you can almost imagine Walt Disney sitting behind the desk. From the front welcome area where his assistant worked until her retirement (a couple years after his death), his formal office with a baby grand piano and his less formal work space fully equipped with a wet bar and maps for Disneyland.

Throughout the office are hints of the favorite characters we know and love, fragments of the elements that created the Walt Disney who created worlds and fantasies we grow up watching and fall in love with. But the most amazing thing about the office – it’s where history was made. We were standing in the office where Snow White was created, where Bambi was sketched out and where other classics like Mary Poppins were dreamed up. You’re completed surrounded by the history in that space, by the awards won from the movies we grew up with and get to step back in time. The space was recreated with actual items used by Walt Disney and bits of pieces of his actual life.

Touring the office of Walt Disney was an amazing experience. The design side of it alone was amazing for me, but finding your favorite characters and toys in the space was amazing. Walt Disney loved all of the characters he created as much as we do, and surrounded himself with them. The office will be available for tours for Gold Members of D23: The Official Disney Fan Club. For more information on the permanent installation of Walt Disney’s Office please visit the D23 website.