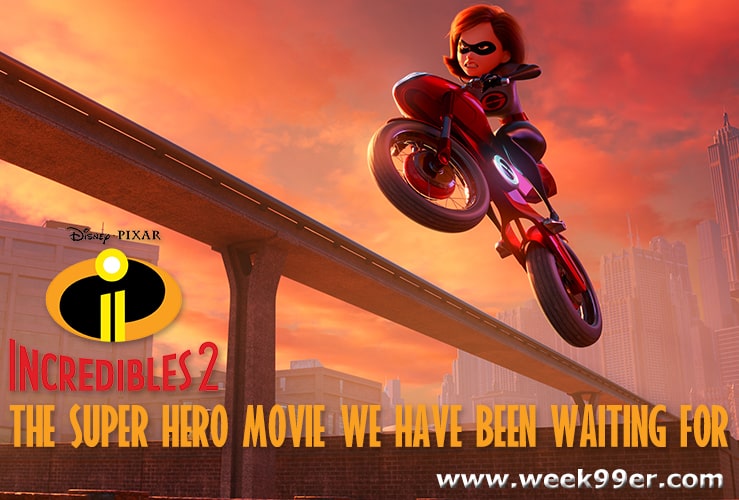 It’s been 14 years since the first Incredibles movie his theaters, and we knew there just had to be a sequel. How could they leave it hanging with a bad guy attacking the city? Well, little did we know that there was a sequel in the pipe line. Director Brad Bird had the idea for the sequel for the Incredibles already in his head when the first one hit theaters. But Bird didn’t want to rush the story or process, or just make a sequel to make a cash grab. He wanted to focus on Elastigirl in the second movie, and focus on the core of the family not just a traditional super hero movie.

But as Incredibles 2 hits theaters, can fans expect a movie that rivals the original? Will it hold up to the fans expectations? Technology has finally caught up to the story that Bird and the artists at Pixar wanted to tell. The updated technology means they were able to create the world of the Incredibles, including more sets and more complicated elements of the movie easier. From more complicated post war modern designs, to the actual outfits for the Supers as well as the extras in the movie, the team members worked hard to make sure to make the movie more believable.

The Incredibles 2 picks up right where the original movie let off, but fans may notice instantly the upgrade in animation. We are back on the street with the Parr family as they take on the Underminer. Supers are still illegal, but the family and their friends are determined to save the day. Combining their super powers, the Parr family is able to stop a lot of bad things from happening to innocent people but that is not how politicians spin it. Once again, they find themselves with legal problems and still in need of finding a new home after a rocket blew up their house in the first movie. But with new backers, there is a chance for Supers to have a second chance to come out of darkness. That is until a new bad guy comes on the scene and threatens everything again.

Get ready to see some of your favorite characters including Frozone and Edna Mode. And while the Parr family is the main focus, and this film focuses on the strength of the family unit as the family dynamics shift, you will notice that Jack Jack is a major focus of the movie. Between Jack Jack and his new found powers and friendships (and even an enemy) you will find yourself laughing at his antics even in the dark battle scenes.

The movie is well balanced with humor, action and most of all – heart. One of the reasons we all love the Parr family and while they are Super heroes, the biggest thing they have is family. It’s that family core that grounds them, makes them relate-able, and even better than any other super hero movie out there. So was the 14 years worth the wait? Absolutely, and you’re going to love this new adventure with the Parr family.

The movie does leave it a bit open ended, so we’re hoping for another sequel in the future, just hopefully it wont take another 14 years! Stay through the credits to not only see some concept style drawings of the characters in the movie, as well as hearing the Supers original theme songs.

Incredibles 2 is in theaters everywhere today! Be sure to get to the theater early enough to check out the new animated short Bao, it will steal your heart before the movie even begins .

Want to learn more about where the magic happens? Take a look inside Pixar Animation Studios and the Pixar Archives.

Get your Tickets now for Incredibles 2: