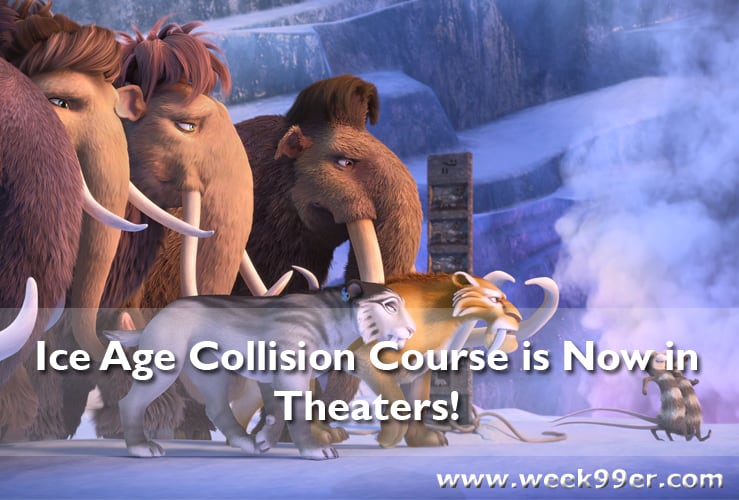 Usually when a movie series hit a fifth movie, it can be a hit or it can be a complete flop. Going into Ice Age: Collision Course I didn’t set the expectations super high – it is after all a kids movie and technically the seventh in the series (if we count Surviving Sid and No Time for Nuts). But in the past few years, a lot of series have had great longer movie series in their cartoon line ups including the Shrek, Kung Fu Panda and Madagascar. But would Ice Age’s newest movie be as good as the original, the supplements and others?

Like all of the previous Ice Age movies, Collision Course has our familiar crew of Manny, Sid, Diego, Ellie, Scrat and of course that silly squirrel we all love. The newest movie has Simon Pegg reprising his role as Buck, as he comes to warn the crew about the asteroid heading towards the planet that is about to end life as they know it. The group has to figure out how to stop the asteroid, save their world as well handle other issues on the way. While the movie has some (somewhat accurate) depictions of asteroid strikes and some extinction events – none were too scary for kids in the theater.

The movie is filled with jokes that will have your kids laughing, and some more targeting towards adults. With characters voiced by Ray Romano, John Leguizamo, Denis Leary, Jennifer Lopez, Queen Latifah, Wanda Sykes, and even Neil deGrasse Tyson, there are plenty of great acting talents bringing this movie to life.

If you’re a fan of the series, definitely see Ice Age Collision Course in the theater. It’s a lot of fun and your kids will love it. They do take fair advantage of 3D effects, so it may be worth the money to splurge on the 3D version. Do stay for the credits as there is an extra scene part way through.

Scrat’s epic pursuit of the elusive acorn catapults him into the universe where he accidentally sets off a series of cosmic events that transform and threaten the Ice Age World. To save themselves, Sid, Manny, Diego, and the rest of the herd must leave their home and embark on a quest full of comedy and adventure, traveling to exotic new lands and encountering a host of colorful new characters.