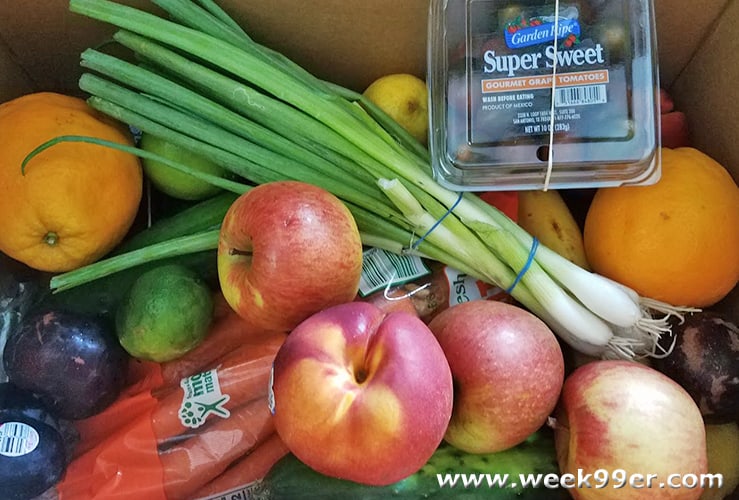 We’ve all been there, about to make dinner and we don’t have the exact produce we need for a recipe or our salad greens have gone bad. We don’t have time to run to the store for one item every time it happens, or even worse – don’t want to pay the price for our produce that we know most likely wont get used.

Every week, we waste a ton of food and money by getting produce that we have the best plans of using. But have you ever looked at the cost of the produce at the grocery store and hesitated because something is expensive (and we’re not even talking the price of organic produce). You can either adapt your recipes, or you can change how you buy produce.

Recently, we were introduced to Imperfect Produce. They reached out and sent us a media box to try out when they launched here in Metro-Detroit. I had been watching and waiting for them to come here. Downtown Detroit has the state’s largest produce distribution center for grocers at Eastern Market, and on the weekends I can easily spend a small fortune on produce for the week.

Imperfect Produce heads to producers directly and buys their “ugly” fruits and vegetables that the larger grocery stores wont buy. This helps the farmers out, and it reduces the amount of food waste in the industry.

Does ugly fruit or vegetables mean they’re bad? Not at all. Instead it may mean they’re a little small, or too big, or just not “perfect” and wouldn’t sell as fast in the store. You actually may not even notice the difference when you look at them when they arrive at your house.

So what is Imperfect Produce? They are your connection to the “ugly produce” and they deliver it right to your door either weekly or every other week. The best part – you will save at least 30% on what you were spending on produce at the store.

Getting a box of produce weekly or every other week sounds great doesn’t it? But how do you know it’ll be things you will use? Once you have subscribed to Imperfect Produce you will get an email the Friday before your delivery week to show you what is in your box. You can pick and choose what you want to keep in your box, or if you want to add more to it you’re able to. You will know what exactly is showing up to your door each week and can use that to base your recipes around so you know what dishes you can make with what is coming.

Imperfect Produce also offers the option to add other items including pasta and essentials to your box for additional charges. Your cost each week may fluctuation some depending on what you add or remove from the shipment.

How They Are Giving Back

One of the things we love about Imperfect Produce is that they are helping farmers get money for the items that they would not normally get paid for. That means the times they spend time growing and harvesting actually get used rather than being wasted. But that is not all that Imperfect Produce does, they actually donate a large portion to food banks and give back to the local communities they are in.

One initiative they have is a social one, where their subscribers can share why they love ugly produce and if you tag them they will donate five pounds of produce to a local food bank your honor. They take their commitment to giving back seriously.

Imperfect Produce brings the slightly ugly fruit to your door at a discounted rate, but they also help reduce food waste. That means, items that would normally end up in the trash or that farmers can’t sell make it to your table.

Just some of the reasons stores reject produce:

But that’s not all, Imperfect Produce delivers your fruits and vegetables in boxes that they will take back and reuse. Again, reducing the amount of items that end up in the trash or would not be used.

Originally, we were sent a box of Imperfect Produce to try out and review. But now we’re subscribers. Why? Because those trips to the store every week I spend easily 20-40 on produce that I don’t even use, and trips to the farmer’s market usually costs a ton more than that. Imperfect Produce allows me to pick and choose what I want with each delivery and I can customize it to fit our meal plan – all while saving money.

We are currently subscribed to the medium conventional fruit and vegetable box every other week and for the cost of $16 for two weeks of produce is almost too good to be true. We happily change our recipes around what comes in those boxes and we love fresh produce coming right to our door.