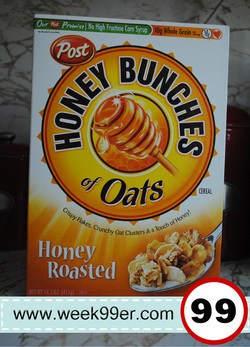 Cereal is a staple in our house, there is even a large portion of our stockpile for cereal. It provides a quick snack as well as a meal when needed. We were sent a box of Honey Bunch of Oats to try and review.

In the past my boyfriend has picked up Honey Bunches of Oats as his cereal of choice – but had one complaint, there wasn’t enough “clusters” for him. So when he saw the box of the box of cereal on the counter he was hesitant on trying them again.

– can I crack into these?” It was later followed by “Do we have BIG bowls?”. Now, let me explain, we have regular sized bowls, and large bowls (about two times the size). But apparently they weren’t big enough for what he wanted for a snack. Instead he came out with one of my large Pyrex bowls full of cereal and milk.

How did they rate? They were gone in minutes! He was happy to find that there were more clusters in the box than the last time he tried them. He did wish the flakes were a bit thicker, so we’ll be picking up the “Just Bunches” for him next time. But overall he was happy with his snack.

We’ll be getting more Honey Bunches of Oats for our stockpile, and more for him to enjoy. It’s lower in sugar than most of other brands, and it has 10 grams of whole grains per serving. Not only does it taste good but it’s good for you!

Now make sure you like Honey Bunches of Oats on Facebook! Tell them Week99er sent you 🙂 And while you’re on their page – enter to win a bicycle, it ends on the 17th, so don’t miss it!

15 thoughts on “Honey Bunches of Oats Product Review and Giveaway”