Every state has one, but they are all different and the designs reflect the state they’re in. I grew up going to the one in Michigan for class trips or even other events. While the capitol is beautiful and modeled after the one in Washington DC, it is unique in it’s own design. When we’re traveling, we often hit several tourist locations along the way but tend to forget about the architectural gems that you can find in the government buildings. I’m not sure why they haven’t been a priority in the past, but after our trip to Harrisburg we’re starting to make them a priority. 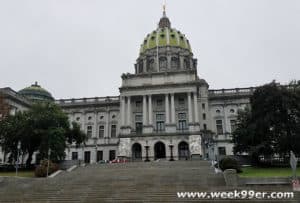 Yes, often the conversation will shut down when someone talks about the government. But the reality is, it’s what’s kept our nation running since it was founded. And we’re not talking about which political party you’re a part of, but the buildings that house both parties and the elected officials that make the important decisions on our behalf. 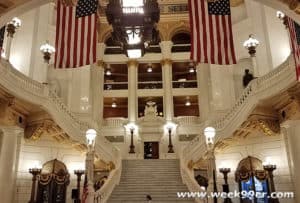 While we were traveling in Harrisburg we make a stop at the Pennsylvania Capitol Complex, where not only the state’s House and Senate meet but also their Supreme Court. The building is open to the public, and they even offer free guided tours of the space. You can get brochures and take the tour yourself, but the tour guide can fill you in on facts and information you may not find printed in the paperwork. 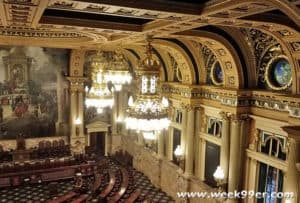 The Pennsylvania State Capitol was built in it’s currently location in the early 1900’s and is a testament to the artists and architects at the time. The tiles in the main entrance and hall way depict images from the history of the state and the main rotunda is wrapped in a William Penn quote. Stand where Theodore Roosevelt gave a speech, look at the beautiful artwork, statues and the rooms where the important decisions are made.

It may not be on everyone’s list to visit when they’re in town, but taking the time to visit the Pennsylvania State Capitol can not only be educational but is definitely worth the visit. Architecture and history buffs alike will find it breathtaking and a must see destination.

Take a look inside the Pennsylvania State Capitol here:

For more information on how you can tour the Pennsylvania State Capitol visit their website.