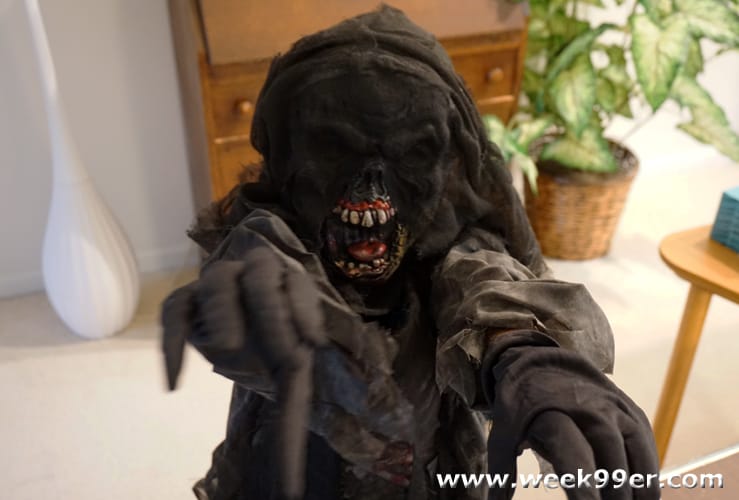 Since Goonie was little I always have let him help choose his Halloween costume. But this year, when Costume Discounters offered me a costume to review – I saw one he’d love instantly and asked for that one. The past several years, he’s been one of his favorite super heroes like Iron Man and Bumblebee for Halloween – but this year, he’s going to be a scary zombie! 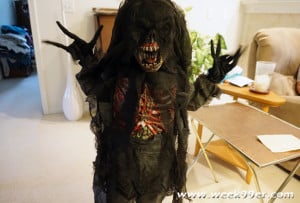 No one can deny that Zombies are bigger than ever right now, and even super heroes are taking a second seat to them. Goonie is only 6, but he’s not afraid of zombies. Actually, the grosser the better in his opinion. So when he tried on his new zombie costume, he was thrilled. His costume is the Burning Dead Zombie Costume, and starts in size M (7-8 for boys). Goonie is still a bit small for this, but the outfit fit him fine with a little extra space to grow into it. We tend to order his outfits a bit larger than usual since Halloween can be include rain or snow in Michigan, and he may need to wear a sweater underneith. 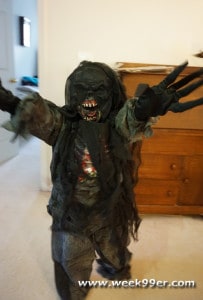 The Burning Dead Zombie Costume includes almost everything your child will need for Halloween 2015! The costume includes the pants, the shirt, gloves and the mask. The chest on the shirt is modeled to be exposed bloody ribs and guts and the face is burned black and a bloody exposed mouth. For under $50 (and sale prices way under that) the costume is a steal. Your child can wear their clothes under it, and their own shoes so they’re comfortable. The mask is easy to see through, so full visibility is there, and no additional makeup is needed to achieve the finished look. 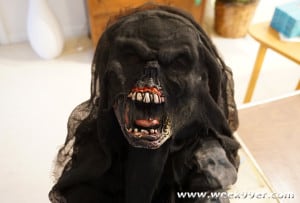 This year Goonie is going to be the scariest kid on the block and at his school’s Halloween party! He was so excited to see a zombie costume that we actually got about a half hour of zombie attacks when he tried it on. We’re thrilled at how high quality the costume is, especially at the price point! No matter what we find at the stores near us the price is almost always double or triple what we find on Costume Discounters, and falls apart right after Halloween is done. Goonie’s new zombie costume will last him for years to come, and several more zombie attacks! Costume Discounters has a huge variety of zombie costumes including a zombie sock monkey! You can find other great affordable options for yourself or your kids – just click here to check out their fun Halloween Costume Options.