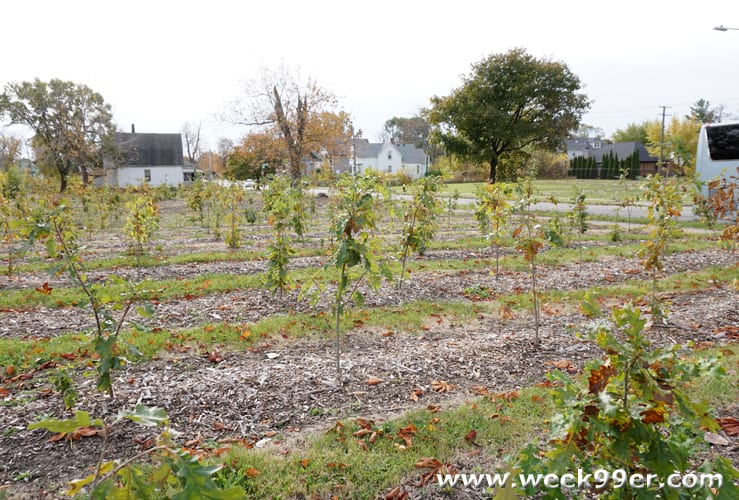 When you imagine a picture of Detroit in your head, most people wouldn’t envision the picture above. We can blame it on the media, the ruin porn and the black eye the city has had for far too long. But living in the metro-area we know that there is more good in the city than there is bad, and the urban farming movement has taken off in the last few years.  On my recent tour with the Michigan Agriculture Council, they took us to Hantz Woodlands on our farm tour. On first glance, the farm isn’t what you’d expect to even see on a traditional farm tour, but the hard wood tree farm serves more than one purpose. 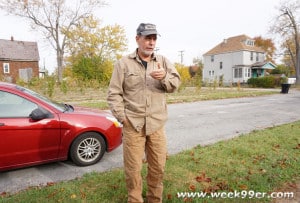 Hantz Farms wanted to make a difference within the city of Detroit, and started within a one block area of the owner’s home. Before Hantz Farms started their project, the square mile around their project was filled with blight, abandoned homes, and considered one of the worst neighborhoods within the city. It took several years, but Hantz Farms was able to get the city of Detroit to agree to sell them the properties at cost, with the understanding they would clean up the properties as well as maintain them. 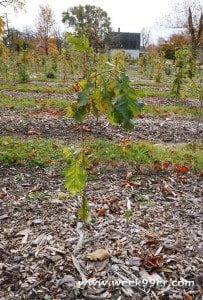 Both the city and the local residents weren’t thrilled with the idea of having an orchard or a traditional farm that would bring a lot of unwanted traffic to the area, so a hardwood farm was born. To date, Hantz Woodlands has purchased over 300 properties within the square mile, removing waste, blight and condemned properties in the process. The lots have been cleared and over 30,000 trees have been planted to date. All of the trees within the farm’s properties are high valued hard woods like Oak and Maples, planted in neat rows that are maintained by the company.  As the trees grow, they will be thinned out or harvested, leaving the neighborhood with safe woodlands near their homes.

The difference in the neighborhood is immediately evident just when you drive by, and the neighboring home owners take pride in the changes. Hantz started the project to help the neighborhood, and allow the neighbors (and anyone else who would like to) volunteer and take part in the planting of each tree planting. Within the square mile that Hantz Farms has dedicated to help, there are still a few plots of land that are still covered with blight, or not being maintained. All of these properties are owned by prospectors and they hope to be able to purchase them soon enough.

I absolutely love any company that is willing to help rebuild and bring positive areas to the city of Detroit, and you can see that Hantz Woodlands is doing that already. I hope they are able to continue their mission and spread to other neighborhoods to continue with the rebirth of our city.