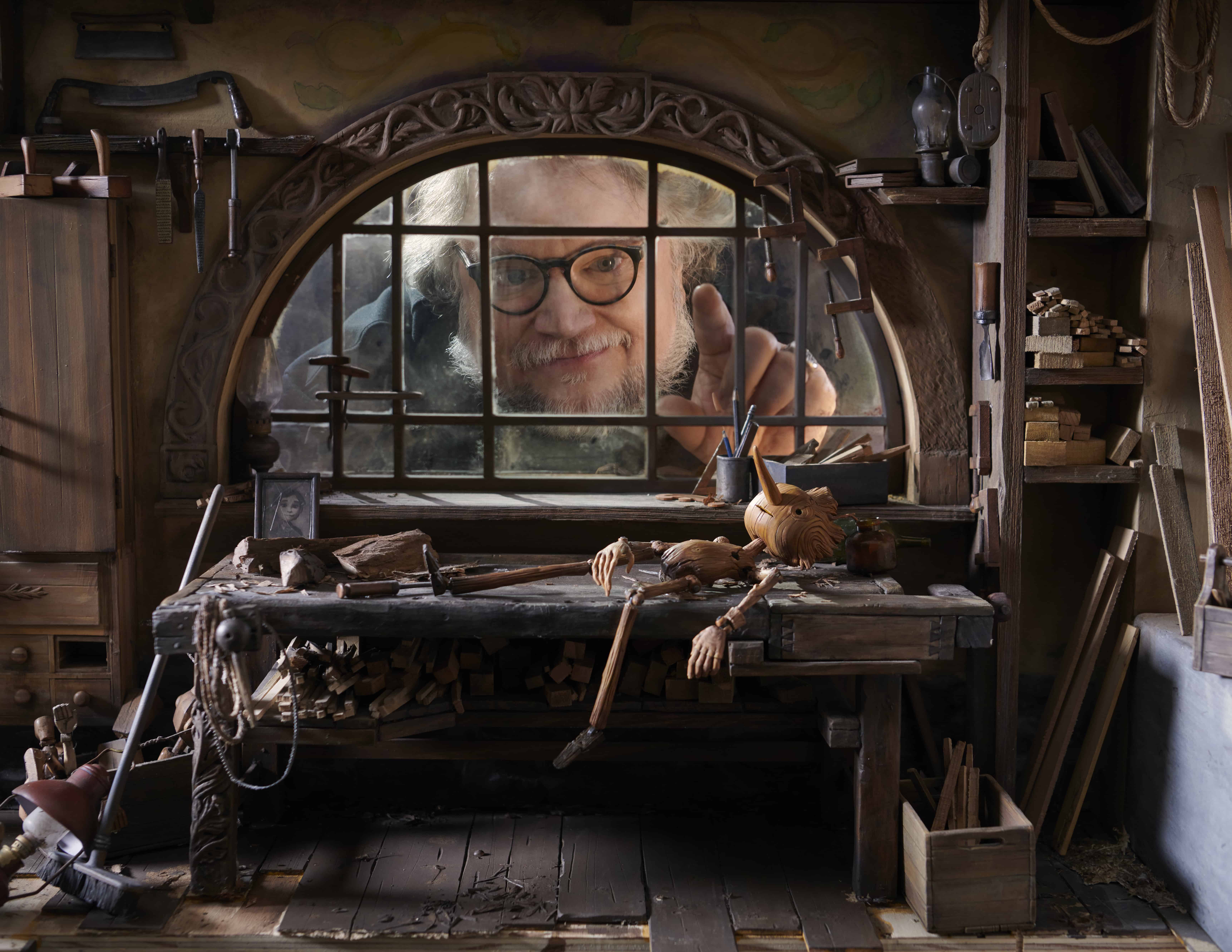 For the second time this year, fans are eagerly awaiting a release of a Pinocchio movie. Following just two months after the live-action Disney+ version was released, a darker version of the story is coming to Netflix from the mind of Guillermo Del Toro. The story has at the base the same older puppet maker and his wooden boy son Pinocchio, but Del Toro takes the story in a much different direction that may be too far for some viewers. Del Toro Fans, do doubt will love this interpretation of the Italian novel from the 1880s, but this version – probably isn’t one that you’ll want to sit your kids down to watch with you.

The story of Pinocchio is one we’ve all grown up with by now. The older woodworker Gepetto is lonely and carves a wooden boy in his shop, the puppet comes to life with the magic of a fairy and becomes Gepetto’s son until he runs off to join the circus and gets in trouble. The story always illudes to the loss Gepetto had in his past, a child or a son that he’s still grieving over. But it’s not part of the story in the more sanitized or child-friendly versions (by today’s standards). In the new Pinocchio however, not only do we meet Gepetto’s son but the audience also sees his death and subsequent grieving and issues Gepetto has after the fact. One night in a drunken stupor, he cuts down the Italian Stone Pine he planted near Claro’s grave and carves a wooden boy out of it. The Wood Sprite brings Pinocchio to life, to help bring Geppetto happiness again.

Some major differences in this telling of the story from the one most people are used to. This version of the story may still have the circus scene, but it does include some animal abuse. This is just one of the reasons that will make you recoil in your seat as you catch the movie. Pinocchio can also die and does multiple times throughout the movie. He goes to the afterlife and has to wait a bit longer each time to come back to life. The death of the character the first time is startling and not what you expect.

Del Toro did, however, decide to leave out the Pleasure Island portion of the story which can be quite controversial, and instead, replaced it with something that may actually be worse. This version of the story is set in the 1930s and 1940s in Italy, while Mussolini was the Prime Minister of the nation. This sets the story right in the middle of the World War II time period, and both Pinocchio and a young boy named Candlewick are sent to a youth camp to train to become soldiers and fight for the country. This, of course, would have happened for many children of that age group and was normalized at the time, but not something we normally see depicted so casually – the acceptance and compliance to a fascist government. Pinocchio and the other boys all give the fascist or Sieg Heil salute multiple times in the movie which is one of the more unsettling parts of the movie. Staying through to a set time period and location in a film does make sense if it was one that was original to the story. But since the story of Pinocchio predates this time period by more than 50 years, it not only seems like it doesn’t fit but also makes you wonder why it would be included at all.

The stop animation is definitely one that can be identified as one Del Toro can be associated with, and at times is beautifully detailed and stunning. The same could probably be said about the dark nature of the story and this telling of Pinocchio. And while we can appreciate a new telling of the story of Pinocchio and a different adaptation overall, but the themes chosen throughout the story are hard to reconcile. It’s mostly a film that Del Toro fans are going to love, but it’s going to be a hard pass for a lot of audiences.

Guillermo del Toro’s Pinocchio will be streaming on Netflix on December 9th.