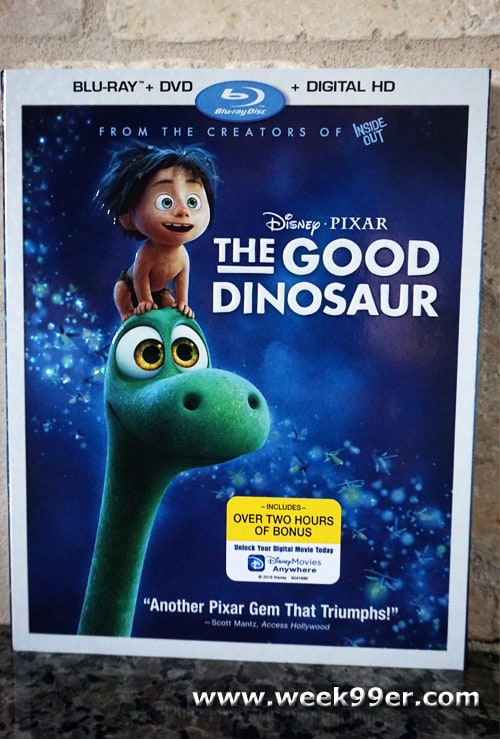 We weren’t lucky enough to catch The Good Dinosaur while it was in theaters, but had read mixed reviews from parents who had taken their kids to see the movie. However, I always take some reviews with a grain of salt, and being a huge Pixar fan I was more than happy to get a review copy of The Good Dinosaur before it came to blu-ray and DVD.

The Good Dinosaur is rated PG because as some parents complained there are some scary scenes that may be too scary for younger viewers. But let’s put this into perspective – we’re talking about a movie about dinosaurs and things that could have potentially happened to dinosaurs. If you would not let your little one watch Jurassic Park or a show on the Discovery channel about dinosaurs, then the Good Dinosaur may not be for them. Keep in mind however, what happens in The Good Dinosaur is no where near as violent as either of the previous examples. But there are some scary scenes, so I personally wouldn’t recommend this toddlers or younger children.

Like many Disney and Pixar movies, The Good Dinosaur is a coming of age story. Arlo is the smallest dino in his family and trying to make his mark. After the loss of his father and getting separated from his family he’s on a quest to find his way back home with his new critter Spot. Family is his world, and Arlo goes through many different feats to get back to his family. While the movie does have some scary parts, and there is the usual loss of a parent (that has been happening as far back as Snow White or if we want to be honest, Grimm Fairy Tales) the movie is filled with heart felt moments, friendship and amazing animation.

The Blu-Ray and DVD Combo of The Good Dinosaur comes packed with bonus features including:

After you’re done watching the movie take the time to go through the bonus features. This is something my boyfriend loves to do, he loves watching more about how the movies were made and what else went into it. If you have little ones who watch the movie – have them watch True Lies about Dinosaurs. It will help them understand what is real and what is made up when it comes to dinosaurs in this movie. But that’s not all you’ll find on the Blu-Ray bonus features – you get to find out how the movie was made with an all new crew, and the competition at Pixar about the movie (Recylcosaurus) – seriously check that one out! The movie is filled with heart and love and you will find more of that in the extras.

You can find The Good Dinosaur on Blu-Ray and DVD Combo Pack that comes with Digital HD – yes, it will add it into your Disney Movies Anywhere collection for you to enjoy over and over again!

The Good Dinosaur has a total run time of 94 minutes and is available online and everywhere today.