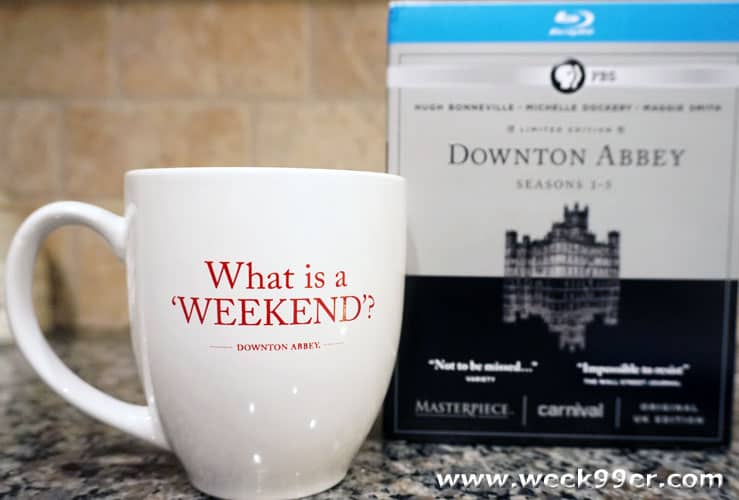 Over the past few years, there have been a few shows that have taken the world by storm. It’s hard to find someone who doesn’t enjoy Downton Abbey and even less people who’ve heard of it. This year you’re going to see a lot of gifts for the Downton Abbey fans out there, and PBS has you covered! From DVD copies of the series, coffee mugs, candles, jewelry and more – there is everything a Downton Abbey fan would love.

PBS Sent us the Limited Edition Downton Abbey Seasons 1-5 Box set as well as the “What is a ‘WEEKEND'” quote mug from Lady Violet. The Blu-Ray set includes every episode from the first five seasons of Downton Abbey as well as 4 hours of bonus video when you go behind the scenes! I had only seen a few episodes of Downton Abbey before, so it was great to be able to continue where we had left off and watch the episodes non-stop. It was amazing how quickly I was sucked into the story and how quickly I found myself getting up to change the discs from the set.

Downton Abbey follows the Crawley family and their staff in the years before WWI and the social upheaval of the 1920’s. All of the Crawley family members lives are intertwined with love, passion, betrayal and more with every level of society as they all head towards unsure futures. Downton Abbey has won Emmy as well as Golden Globe awards, and will hook you the moment you start watching the first episode.

The Limited Edition of Downton Abbey Box Set has a total of 14 discs, and a total run time of around 41 hours. The Downton Abbey Season 1-5 Box set is available on Amazon and PBS store online, and you can find the What is a Weekend mug exclusively on PBS’ web store.