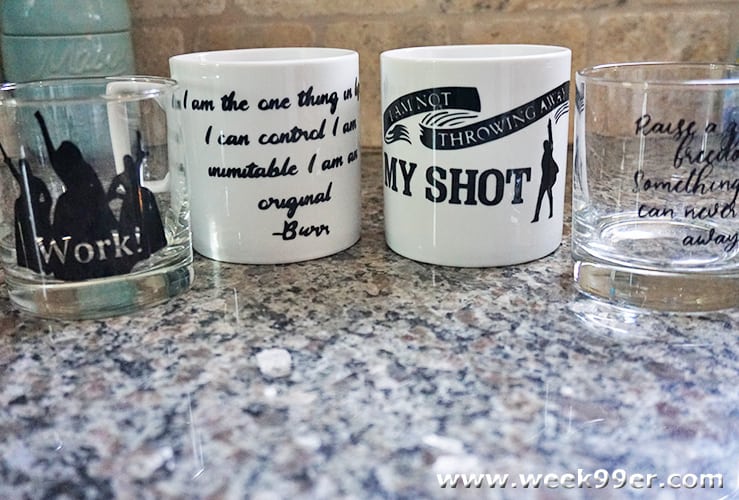 In only a couple days, one of the most anticipated Broadway shows will be making it’s appearance on Disney+. While Hamilton tickets sell out at a moments notice, if you have Disney+, you can watch an stream the musical over and over again once it hits the platform this Friday.

If you’re like us, chances are you’re not going to throw away your shot to catch this musical and enjoy watching it over and over again. You may even be planning your own Hamilton watch party with your family. And if you have a Cricut, we’ve got some free files you can use to make your own cups, decor or whatever you want for your Hamilton themed night.

We have a Cricut Joy, and created these fun mugs and glasses for our own movie night so we can raise our own glasses to freedom while enjoying the show. We created some of our favorite quotes from Hamilton into easy graphics you grab and use yourself. There are almost too many great quotes from the musical that we could create a full line of our own! Since both the mugs and glasses were smaller, we sized these PNGs in our Cricut Design Space to under 3 inches tall and they fit perfectly!

Grab your Hamilton files to make your own glasses below!

The filmed version of the original Broadway production of “Hamilton” combines the best elements of live theater, film and streaming to bring the cultural phenomenon to homes around the world for a thrilling, once-in-a-lifetime experience. “Hamilton” is the story of America then, told by America now. Featuring a score that blends hip-hop, jazz, R&B and Broadway, “Hamilton” has taken the story of American founding father Alexander Hamilton and created a revolutionary moment in theatre—a musical that has had a profound impact on culture, politics, and education.