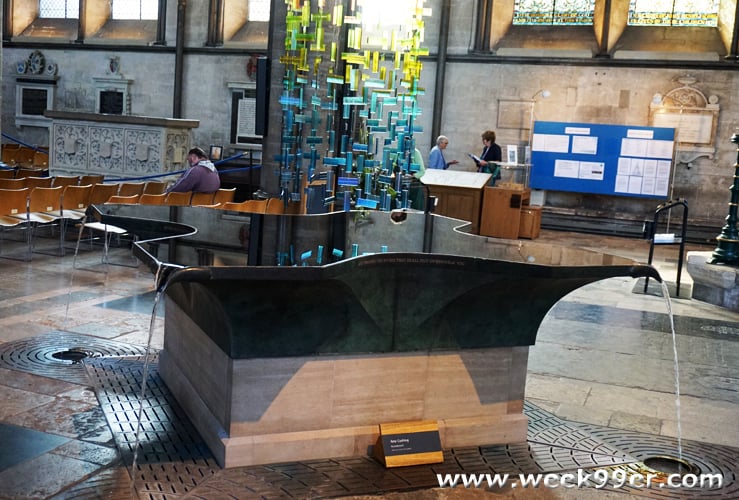 As you travel through Europe, there are some places you expect to have a certain reaction to, and others you go into unknowing. Through my years of studying, I knew a little about the Salisbury Cathedral. But what I didn’t know, was the impact the building would have on both of us as we traveled, and how the beauty inside even put more famous churches and cathedrals we’d visit later to shame.

We were given a private tour of the Salisbury Cathedral while we were in the area, and the large stone facade only hints at the beauty inside. From almost a millennium of history, the Salisbury Cathedral is still an active place of worship, houses artwork that is centuries old to modern and is home to one of the four remaining copies of the Magna Carta – a reason to visit on its own.

The Salisbury Cathedral is constructed almost completely of locally sourced stone and timber. But the large cathedral has no foundation or pylons like other buildings its size. Instead, the cathedral was constructed on a layer of rock that uses the local water table as support. The water levels are still checked daily, and through the centuries the church has held its ground with minimal movement – except some slight curving of the pillars inside. The building a feat of architectural and engineering wonder at 70 thousand tons of stone with over three thousand tons of timber for the roof and 450 tons of lead.

Throughout the centuries, the Salisbury Cathedral has had some changes due to the religious movements of the time. During the time of the reformation, the cathedral went through some adjustments and while the leadership of the church remained intact, certain elements were lost or destroyed. Later in the late 1700’s James Wyatt was brought in to remodel the church, but his update stripped some of the elements the cathedral was known for including the screen between the Nave and the Apse. His renovations of the space also included the white washing of the original colors throughout the space as well as the 13th century stained glass.

While hearing a list of everything that was striped from the cathedral is heart breaking, the changes to the space creates a unique space that you cannot find anywhere else. Since the screen was removed and destroyed, it cannot be replaced – which gives Salisbury Cathedral the boasting rights of being the only cathedral with an uninterrupted view throughout it’s whole worship hall. This unobstructed view is breathtaking, especially from the stained glass level where you can see the complete view of the triforium on display.

Any visitor of the Salisbury Cathedral can get lost in the space for hours as you explore the artwork throughout, the tombs, the gorgeous baptismal font, side chapels and more. History lovers will be intrigued by the Magna Carta, the final resting place of Lady Katherine Grey and a private worship space of Katherine of Aragon where the pomegranate symbol survived the anger of King Henry the VIII as well as the centuries. Take time to get lost at the Salisbury Cathedral. Enjoy the beauty, the history for only a donation. Be sure to take time to visit the refectory for freshly made baked goods and a meal. Be prepared to fall in love with the Salisbury Cathedral as it will become the base you compare all others to throughout your travels.

This article was originally published in December 2016. Please check with the Salisbury Cathedral about current hours for visitors.