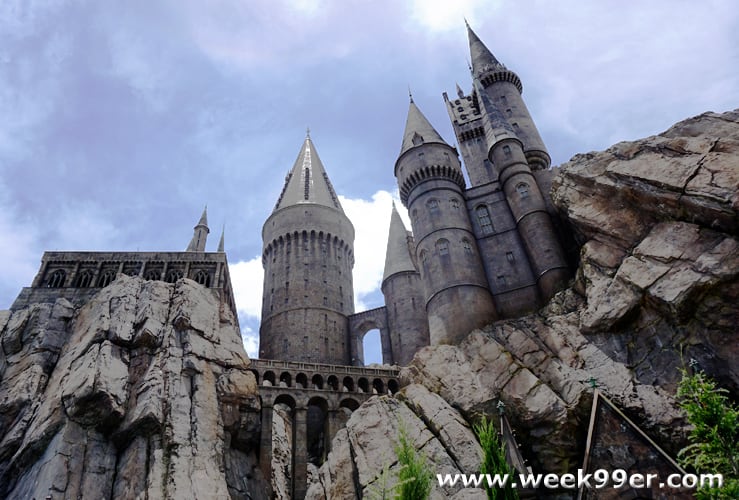 Muggles from all over the world are flocking to Universal Studios Orlando to check out the The Wizarding World of Harry Potter and everything you can do there. It’s not just a ride, it’s a fully immersive experience that fans are in love with. Not only can you visit Hogwarts Castle, but you can also ride the Hogwarts Express, visit Hogsmead, enjoy some Butter Beer, visit Diagon Alley, Knockturn Alley and even 12 Grimmault Place. The details at Universal Studio Orlando is amazing, and is something that every fan of the Harry Potter series (books or movies) needs to experience. 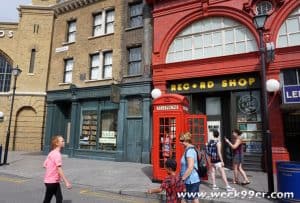 We are huge fans of Harry Potter, and have all of the books and movies from over the years. Yes, we even were at some of the midnight releases of the books at stores as well. So when in Orlando last month, I was thrilled when Universal Studios Orlando gave me free passes to check out the park, and it included the Park to Park option so we could do both Universal Studios and Islands of Adventures. The Park to Park option is key if you plan on going to The Wizarding World of Harry Potter, so you can do both parts of the experience, since part is in Universal Studios and the other is in Islands of Adventures. 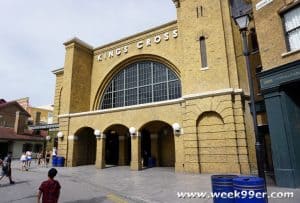 When you go into Universal Studios Orlando the majority of the park looks similar in layout, that is until you walk up to The Wizarding World of Harry Potter. The mood changes, it feels like you’ve stepped into a bit of downtown London. You’re instantly standing with 12 Grimmault Place to your right, the Night Bus to your left (complete with the talking shrunken head and driver) and Kings Cross station straight ahead. While the train station isn’t exactly the same as the one in London – the representation is pretty good and fans will love it. 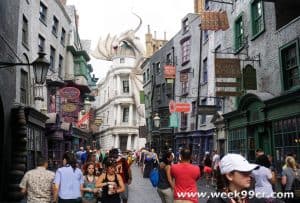 Step through the wall and you’re instantly transported to Diagon Alley and don’t require to know the special brick pattern to get in. Inside the buildings are slightly torqued, twisted and everything we expect to see including shops from the movies including Olivanders Wand shop, Weasleys’ Wizard Wheezes and Gringott’s Bank. The whole area of Diagon Alley is there, stores are open and you can even pick up your own wand and robe. 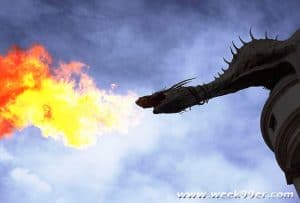 Go through the dark opening next to The Leaky Cauldron and you find yourself in the dark underbelly that is Knockturn Alley. With the Dragon breathing fire every so often – there is not set schedule or amount of fire, but it’s definitely worth seeing. Even with the dragon 30 feet above your head, you can feel the heat from the flames as it breathes fire! 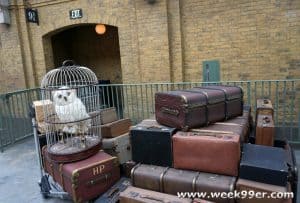 While Diagon Alley is amazing, and your newly purchased wands can make things respond though out the park – everyone knows you are really still waiting for your invite to Hogwarts! Take a short walk to Kings Cross station and follow the queue to the train platform. Remember you cannot get into the train station without the 2 park ticket. Employees at Kings Cross wont know what you’re talking about if you ask about Platform 9 3/4 if you ask, but if you don’t want to ride the train (who doesn’t want to ride the train!?) you can ask to just go see the “lost luggage area” and they will take you to an elevator that takes you right to the train platform. 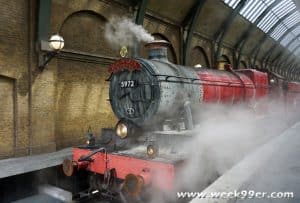 Seeing the Hogwarts Express is amazing on it’s own. The actual train that takes you from park to park, but riding the train is an experience. You will ride in a train cabin just like in the movie and projected images of the main cast and voices provide a little show when you are on your journey. The only complaint we had was Hermione’s voice was a bit off, but otherwise it was a nice touch that fans of all ages will love. 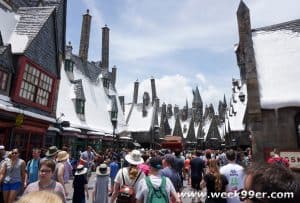 The Hogwarts Express drops you right off at Hogsmead where you are instantly standing among the snow topped buildings (yes in Florida) with Hogwarts Castle off in the distance. You can find a lot more stores, butter beer and even more rides on this side. We found Hogsmead was a lot busier than Diagon Alley, most likely because of the draw of the Castle.

I was amazed at how much detail is in both sides of The Wizarding World of Harry Potter, and it actually drops fans right into the movie. Muggles will love visiting and experiencing everything. It is definitely a must do for any Harry Potter fan!

Update: As of July 1st, the Unlimited Express pass includes all of the Wizarding World attractions!

Unusual Museums of Amsterdam You Would Want To Visit

Inside the Office of the Creative Genius Walt Disney