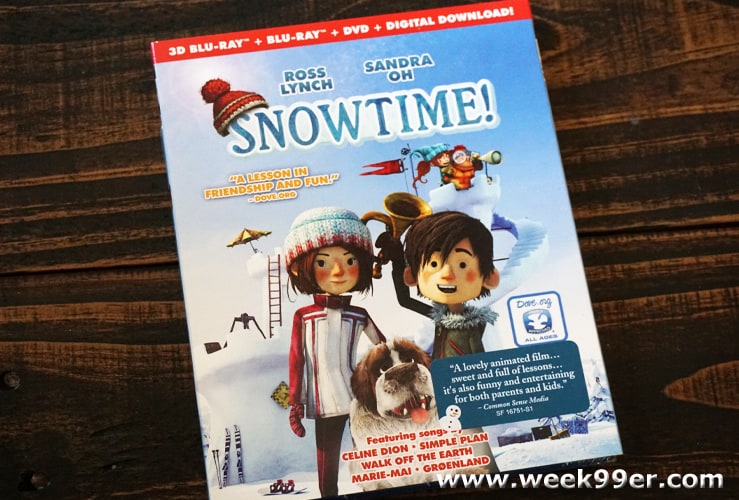 As a kid, one of my favorite things to do in the winter was to go out and play in the snow. Your imagination goes wild and throwing snowballs was always a ton of fun. This joy of childhood is captured perfectly in a new animated movie Snowtime! The movie was a selection in the 2016 Sundance Film Festival, and while it’s not one that many of us heard of, is a movie you and your family are going to enjoy.

Shout Factory Kids sent us a copy of Snowtime to check out. The movie follows two 11 year olds, Luke and Sophie who, with their friends, start an epic snow ball fight. The game two bands of kids are battling to see who can win over winter break. While the snow balls are flying, the movie covers important topics like friendship and teamwork. The movie is animated in 3D, and doesn’t contain any harsh language or violence – earning the film a Dove.org mark, making it safe for all ages.

Snowtime! is based on The Dog Who Stopped The War and features a stellar voice cast; including Sandra Oh (Grey’s Anatomy), Ross Lynch (Austin & Ally) and several other stars. It has a total run time of 82 minutes and is rated PG.

A romp through childhood full of heart and humor, the new animated feature Snowtime! is a captivating cinematic adventure about the kids in a small village who decide to have a massive snowball fight to amuse themselves during the winter school break. An official selection of the 2016 Sundance Film Festival, this tale of hope and friendship makes its home entertainment debut on November 8th, 2016. Available as a 3D Blu-ray/DVD/Digital Combo pack and on DVD, Snowtime! also comes loaded with bonus features, including interviews with stars Sandra Oh, Ross Lynch and producer Marie-Claude Beauchamp, as well as interviews with Celine Dion, Simple Plan, and Walk Off The Earth, and teasers and theatrical trailers.

To amuse themselves during the winter school break, the kids in a small village decide to have a massive snowball fight. Luke and Sophie, both 11 years old, become the leaders of the opposing sides. Sophie and her cohorts defend an elaborate snow fort against the assault of Luke’s horde. Whichever side occupies the fort at the end of the winter break, wins! But what starts out as pure youthful fun and enthusiasm deteriorates into a more serious conflict. Can joy and peace be restored, or will the kids’ friendships fall in a flurry of ice and snow?

By Becky 10 hours ago