We’re fans of most action movies in our home, some obviously more than others. And with the release of the sixth Mission: Impossible film this week, my boyfriend was more excited to see the latest installment in the franchise. For me, the movies tend to follow the same basic plot and while the action scenes are entertaining, the best part is watching Tom Cruise get injured over and over again. There is a lot of that in Fallout but there has to be a bigger draw to the movie than the same story over and over again.

Mission: Impossible Fallout brings Ethan Hunt back out to save the world again, and this time everything he loves is at risk. Sounds familiar right? The movie is entertaining, especially if you love the movies and there are tie backs to characters from the original movie. But what else can fans look for throughout the film?

Fallout will take you on a whirl wind tour of the world as Hunt and his team try to stop nuclear bombs from going off. From the streets of Paris, to the roof tops of London and even the mountainsides of Kashmir, the movie takes you through a fast paced tour of it all. So many iconic landmarks are seen in the movie and shot at different angles you just wont see even if you are touring the cities yourself.

There are four strong women characters in the movie including Isla, the White Widow, Erika Sloane and Julia. All are strong in their own rights, and their strengths are highlighted when they are on screen. However, the movie would not pass the Bechdel test since not only do the women never interact with each other, but they hardly would be in what is considered lead roles. Their characters are a bit flat and one toned. Yes, it’s nice to see women who can kick butt, but taking control rather than being a pawn would be a nice change of pace.

New Characters – Who May Not Be What You Expect

The movie introduces new characters to the franchise. Each new character seems to be a misdirection from what they are originally presented with. With good guys going bad, bad guys that aren’t that good and even the familiar characters taking on a new role in the world. There’s a bit of misdirection every which way you look which actually makes this interesting.

From motorcycle chases, helicopter chases and even fight scenes this is where Mission Impossible excels every time. The bad guy will get his butt kicked and the movie will keep you entertained. Yes, even in that infamous scene where Tom Cruise actually broke his ankle filming it is in the movie. Some were a bit graphic and I closed my eyes through them, but overall the film moved at a decent pace and the action is what kept it moving.

Mission: Impossible – Fallout is in theaters everywhere on July 27th. 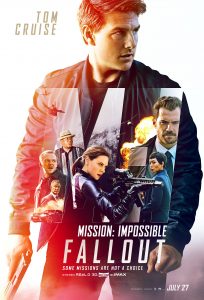