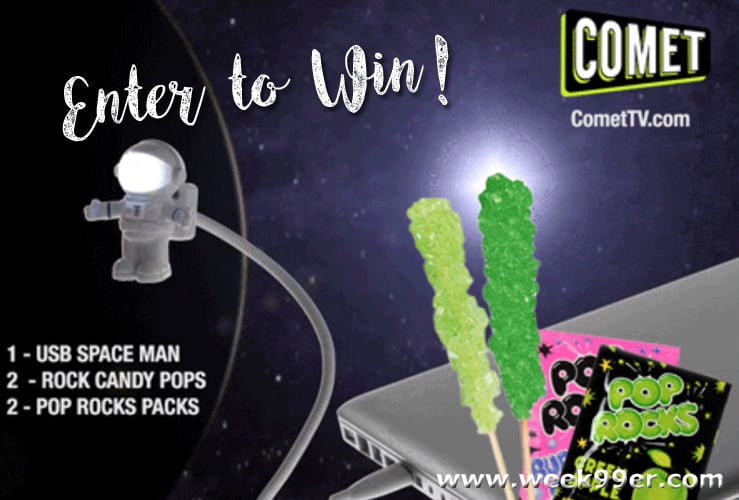 The weather may be cold, but you can heat it up with a Flash and some Pop (rocks). This January Comet TV has released specials to go along with their regular line up including Flash Gordon and Futureworld. The shows are some of our favorites and add in some space (type) candy like Pop Rocks and Rock Candy and you’re going to have a great time. With fun shows, and a USB Space Man – your January is going to warm up – or at least you’ll be buried under a pile of blankets binge watching your favorites. Comet TV is doing a fun giveaway to help you stay entertained this month, read more about what shows are coming up and what you can win below.

COMET TV has a whole crop of Future-tastic films for January that will start your New Year out right! Check out the full January viewing guide

Two years after the original Westworld tragedy, The Delos Corporation have reopened a variety of theme parks, but all is not what it seems.

In a not-too-distant dystopian future, Max (Mel Gibson), an officer with the Main Force Patrol, launches a personal vendetta against the gang when his wife (Joanne Samuel) and son are hunted down and murdered.

In a remake of the 1975 classic, LL Cool J invites viewers to join in the new sport of… Rollerball. It’s a violent extension of roller derby with motorcycles, metal balls and adventure so intense it will cause Chris Klein to flee the country for his life.

Flash… Ahhhh… King of the impossible! Ming Merciless has set his sights on destroying earth, and only one man can stand in his way…

Young soldiers (Dean Cain, Justin Whalin) become involved in a war that has lasted more than a century.

Available on television digi-networks and online at CometTV.com, COMET offers something for everyone and has an incredible array of movies that you simply can’t get with a subscription to streaming platforms like Netflix, Amazon, or Hulu.

Comet TV is giving one reader a fun prize package including a USB Space Man, Rock Candy Pops and Pop Rocks! Read how you can enter to win below.

Each household is only eligible to win ONE (1) COMET Space Man Landing Prize Pack via blog reviews and giveaways. Only one entrant per mailing address per giveaway. If you have won the same prize on another blog, you will not be eligible to win it again. Winner is subject to eligibility verification.