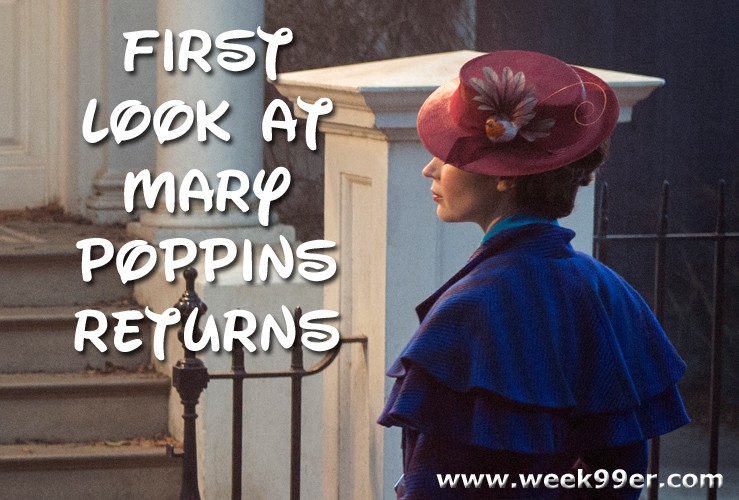 Growing up, we always loved spending time at our grandparents. But one of the things we looked forward to was watching Mary Poppins every time we stayed over. I’m sure they were sick of watching the movie, but for us it was what helped building our memories. Any time I watch Mary Poppins now, I remember sitting in their living room, smelling the wood burning stove and watching one of our favorite movies.

The whole thought of Mary Poppins brings back happy childhood memories for me, from the songs and magical animation included and more. So when Disney announced earlier this week they’re bringing back Mary Poppins, my inner child did a happy dance. Mary Poppins Returns is coming to the big screen on Christmas day in 2018, and will be staring Emily Blunt as Mary Poppins. Still set in the past since the original Mary Poppins is based during the British Suffragette period (around 1906), Mary Poppins Returns is based in the 1930’s when the Banks children are adults and introduces us to new characters.

Mary Poppins Returns is based around the second book in the Mary Poppins Book Series “Mary Poppins Comes Back”, and we can hope that means it’s going to be the beginning of the rest of the Mary Poppins series. So far we only have a side glance of Emily Blunt as Mary Poppins – but what we do see is that classic blue coat, the carpet bag and just a hint of the door on Cherry Lane. It’s enough to throw back those bits of nostalgia and get us excited about this movie, and we can’t wait to see more to come from Disney on this title! Check out more about the movie and the image that has been released below.

The film, which introduces three new Banks children, played by Pixie Davies, Nathanael Saleh and newcomer Joel Dawson, also features Dick Van Dyke and Angela Lansbury. The film is set in 1930s depression-era London (the time period of the original novels) and is drawn from the wealth of material in PL Travers’ additional seven books. In the story, Michael (Whishaw) and Jane (Mortimer) are now grown up, with Michael, his three children and their housekeeper, Ellen (Walters), living on Cherry Tree Lane. After Michael suffers a personal loss, the enigmatic nanny Mary Poppins (Blunt) re-enters the lives of the Banks family, and, along with the optimistic street lamplighter Jack (Miranda), uses her unique magical skills to help the family rediscover the joy and wonder missing in their lives. Mary Poppins also introduces the children to a new assortment of colorful and whimsical characters, including her eccentric cousin, Topsy (Streep). The film is produced by Marshall, John DeLuca and Marc Platt. The screenplay is by David Magee based on The Mary Poppins Stories by PL Travers with Marc Shaiman and Scott Wittman writing all new songs and Shaiman composing an original score.

MARY POPPINS RETURNS will be released in U.S. theaters on December 25, 2018!