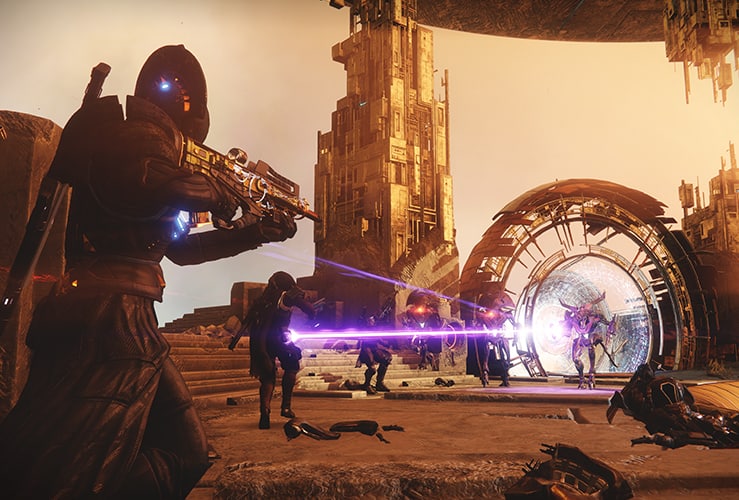 If you played Destiny, then the mechanics will not be a surprise.  All the buttons are the same and the basics translate from the original.  Even the opening monologue seems to be the same.

For anyone playing the sequel before the first, you won’t need to play the initial game, but you should.  For this review, I purchased the first one, game of the year edition, for around $20 USD for XBOX 360.  The right trigger is to fire, Y to cycle through weapons, B to crouch.  Basic game fare.

Unless you have been avoiding the reviews, you already know how the story begins.  Most of this is in the trailers, but minor spoilage that won’t take away from the game to follow.  You start off being attacked by an unknown foe that is after the light from the large Entity/Orb/Planet/Small Moon (or Space Station?) called the Traveler.  You lick your wounds and are led by a hawk to your new base of operations.  From there, you need to get the light back, kick butt and maybe take names.

The developers apparently wanted to make you feel it (make you feel alive again) in this one.  After you lose your light you move slow, so very slow.  Things do get better, but you have to work for it.  Then, when you are doing better, you are still not at the prior game’s abilities at the same character level.  But don’t worry, you have the others that are playing to help you out, if they’re around.  As far as NPCs, the game is very sparse as they are not in as good humors as you are.

The game play is good, fast and hard.  Not much changed from the first incarnation, but there are some differences.  There is a new melee weapon that you should try when you get the ability to do so.  Helps take down some of the baddies easier than the guns.  I have only made it to eighth level, so I do not have the gun yet.  From what I have been told, the gun is not as useful this time around.  I will be looking to test the limitations for myself.

Would I recommend this to a player of the series: Yes!  To the new arrival to this franchise, you may be a little frustrated when compared to other FPSers out there.  There is an MMO element to it, but it does not detract from game play.  The beginning is not as fast paced as other similar games and while you do not need to have played the first one, it helps get you over the bumps in the road and the bruises you will definitely suffer as you will know what to look forward to.  Be okay with dying several times as you start.  You should be able to avoid the grim reaper better after a few levels, but even the highest level character will bite it from time to time.

You can get Destiny 2 on PC, PS4 and Xbox One

Kids Can Have Some Mythical Fun with Finding Nessie