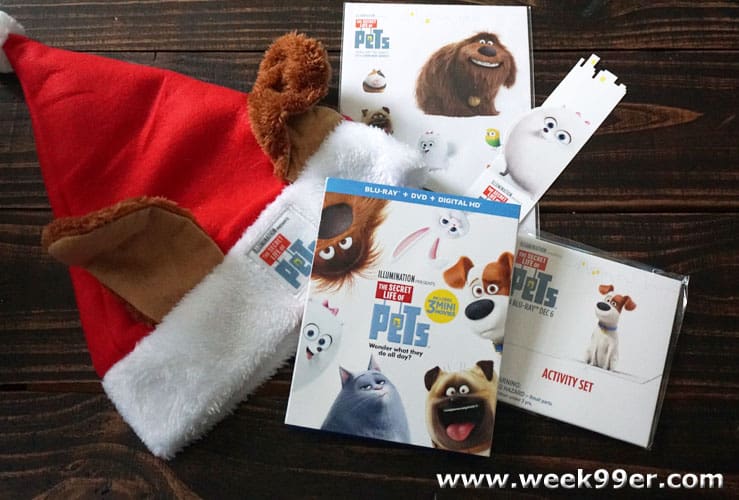 Have you ever wondered what your pets do while you’re not at home? We tend to check in on our cats and notice them doing the same things we see when we’re home, laying around a lot and moving from sun spot to sun spot. But what is really going on? Illumination Entertainment’s new film The Secret Life of Pets takes you inside your home when you’re away at work, with some hilarious results.

We weren’t able to see The Secret Life of Pets in theaters, but wanted to see it after the first scene with the daschund and the mixer. So when Universal Pictures sent us a holiday package with the movie – we rushed to put it in the DVD player. The movie follows Max, a terrier who loves his human more than anything in the world. One day, his human comes home with a new dog to join the family and there is a fight for dominance that send both Max and Duke and all of the neighborhood dogs, cats and even birds on an adventure.

The movie is adorable, and any pet owner can relate to the connection we have with our furry friends. Their quirky personalities are ones we fall in love with and an adventure of a lifetime make this a must have movie in your collection. The Secret Life of Pets has a total run time of 172 minutes and is rated PG. The family friendly film is great for your kids, and to add to your holiday wish list!

We got our copy of Secret Life of Pets and we’re all excited to watch it – especially Jack! Haha #secretlifeofpets #catsofinstagram #jackjack

From December 9th- March 31st, Amtrak is running a special Pet’s Ride Free Promotion. During the first year of Amtrak’s pet program, more than 15, 000 dogs and cats traveled with their owners on select Amtrak trains across the country.  Information on the “Pets Ride Free” offer is available at Amtrak.com/secretlifeofpets, at select ticket counters and stations, and on trains, including AmtrakConnect Wi-Fi portals. In addition, a limited number The SecretLife of Pets prizes will be available to customers at select stations. The program will be supported in 40 Amtrak markets nationwide including New York City, Los Angeles, Chicago, Boston, Washington, D.C., Philadelphia, Minneapolis, San Francisco, Oakland, Dallas, Baltimore, Cleveland, Portland, Seattle, St. Louis, New Orleans, Pittsburgh, Orlando, Miami, Jacksonville, Charleston and others.

About the Secret Life of Pets:

This holiday season, the answer to the question “Ever wonder what your pets do when you’re not home?” is answered when The Secret Life of Pets comes to Digital HD November 22, 2016 and 4K Ultra HD™, Blu-ray™ 3D, Blu-ray™, DVD and On Demand December 6, 2016 from Universal Pictures Home Entertainment. The humans behind the Despicable Me franchise present America’s top-grossing original film of the year, the animated comedy is a worldwide hit with over $834 million in global ticket sales. The Secret Life of Pets is “non-stop action and laughs,” says Peter Travers of Rolling Stone. The 4K Ultra HD™, Blu-ray™, DVD and Digital HD versions feature nearly an hour of bonus content, including three hilarious mini-movies: the all-new Norman Television and Weenie PLUS Mower Minions which debuted in theaters and is now available to own.

In their fifth fully animated feature-film collaboration, Illumination Entertainment and Universal Pictures present The Secret Life of Pets, a comedy about the lives our pets lead when we leave for work or school. Max, voiced by Louis C.K., is a loyal terrier living a perfectly happy existence until his owner, Katie (Ellie Kemper) brings home Duke (Eric Stonestreet) a big, boisterous mutt she finds at the shelter. When Max and his unruly new “roommate” slip away from their dog-walker, they find themselves lost in the urban jungle of New York City. In an attempt to stay ahead of animal control and a rebel band of abandoned pets led by an unhinged bunny named Snowball (Kevin Hart), they put aside their differences to survive the epic journey back home.

The film will be available on 4K Ultra HD™ in a combo pack which includes 4K Ultra HD Blu-ray, Blu-ray™ and Digital HD with UltraViolet. The 4K Ultra HD™ will include all bonus features on the Blu-ray™ disc.