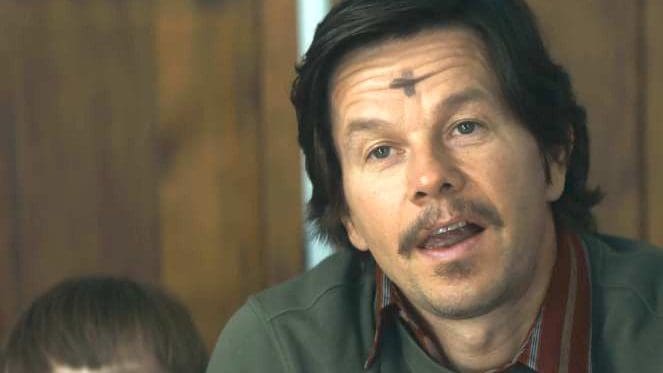 If you would tell someone that a former boxer with a drinking problem and a criminal record would be on track to becoming an inspirational faith leader and priest – they’d tell you that was ridiculous. But that is exactly the true story of Stuart Long, who later was known as Father Stu. The stranger than fiction faith story is hitting theaters this week and is a movie that is filled with heartbreak, laughs and one man’s journey through Hell to get to his path of faith.

Father Stu’s story is being brought to life with Mark Wahlberg taking directing and playing the main role. Wahlberg not only portrays Long in the top of his health (although the lowest in his life), to when he is ill later and actually gained the weight he needed for that portion of the character. The pre-roll talk by Walberg mentions he was inspired by Father Stu’s journey and he takes portraying the role seriously. He delivers not only the action and the laughs, but keeps the audience engaged throughout the film.

Father Stu is now in theaters everywhere. While this may not be the movie for everyone, it is an inspirational story and one that will people who are struggling with their own faith or path to religion will enjoy. It does contain cursing, drinking, and other items along Father Stu’s path to religion and through the end of his journey – but it shows that even a flawed person can find their own path despite the odds.

For a movie that is obviously a religious subject, there are moments that it is a bit heavy-handed on the religious aspects – which can be expected. It does not, however, come off preachy or judgemental if you don’t believe the same as the people in the story do, which is something that we appreciated. It simply is a story of one man’s inspiring journey that lead him to faith, even if none of the signs would have pointed him there.

Based on a true story, Father Stu is an unflinchingly honest, funny and ultimately uplifting drama about a lost soul who finds his purpose in a most unexpected place. When an injury ends his amateur boxing career, Stuart Long (Mark Wahlberg) moves to L.A. dreaming of stardom. While scraping by as a supermarket clerk, he meets Carmen (Teresa Ruiz), a Catholic Sunday school teacher who seems immune to his bad-boy charm. Determined to win her over, the longtime agnostic starts going to church to impress her. But surviving a terrible motorcycle accident leaves him wondering if he can use his second chance to help others find their way, leading to the surprising realization that he is meant to be a Catholic priest. Despite a devastating health crisis and the skepticism of Church officials and his estranged parents (Mel Gibson and Jacki Weaver), Stu pursues his vocation with courage and compassion, inspiring not only those closest to him but countless others along the way.