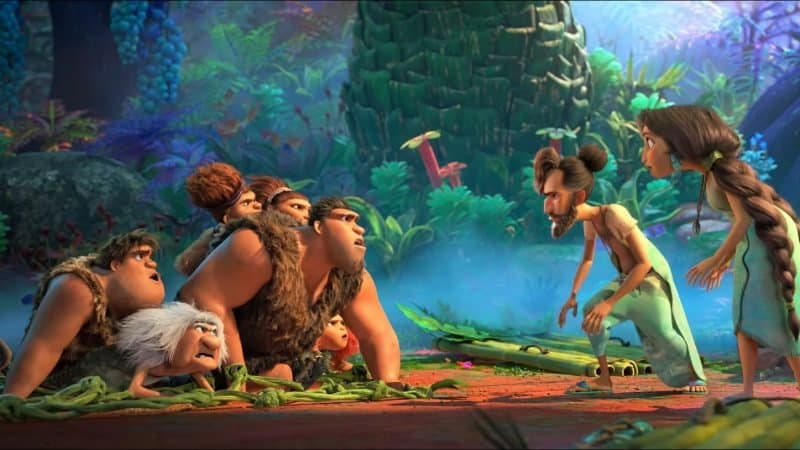 It’s been seven years since audience fell in love with the Croods – the prehistoric family that is finding their way out of the cave and into the real world. We’ve been wondering what’s happening in their world since they emerged from the cave and met Guy. The fate of the family and the movie were on hold with the project being delayed and current release dates of movies continuing to be pushed out this year. But, the Croods are back in their sequel A New Age, coming to select theaters later this week and to digital release in a couple weeks.

Despite the time that has passed, The Croods 2: A New Age picks up right after the first movie. The story of the Croods continues as they are finding a new place to call home, and Eep and Guy have their budding teenage romance. But it focuses a lot more on Guy and his dream of finding “Tomorrow” a place his parents told him to find as a kid. What the Croods find instead is the Betterman’s – a new age couple and their daughter Hope in a compound that is almost too good to be true.

Much like the first movie, A New Age is full of breathtaking animation, weird creatures and interesting situations that only Cave people could find themselves in. Add in a culture clash, updated jokes and humor – the sequel is almost everything we wanted and hoped it would be.

There are weird moments in the film that seem a bit out of place – including an almost 90’sesque moment in the last battle. The Thunder Sisters is mentioned throughout the film, but when they actually take the screen – it is a bit odd and seems out of nowhere. That doesn’t mean it doesn’t lead to a lot of laughs.

Over all, the movie is a great addition to the story of the Croods, and where their family will go to next. Kids will love the movie and the fun adventures that the family has in this chapter. With some crude humor, the movie is going to be one that your kids are going to watch over and over. The movie is a nice option in a year that has been devoid of releases that are kid friendly and ones the whole family will enjoy.

THE CROODS: A NEW AGE – in select theaters November 25.

Give Back with The Croods this Holiday Season:

Universal will make a donation for every time fans use #CroodsCare on Twitter, and will also match funds donated directly to the Feeding America website via the Croods Care Landing Page – www.feedingamerica.org/croodscare

Fans can also contribute via a “Virtual Fruit Drive” on Animal Crossing: New Horizons by visiting “Croods Cove” using dream code: DA-1282-8266-2121. Each piece of virtual fruit that users donate on the island will translate into real meals for families in need.

About The Croods: A New Age:

The Croods have survived their fair share of dangers and disasters, from fanged prehistoric beasts to surviving the end of the world, but now they will face their biggest challenge of all: another family

The Croods need a new place to live. So, the first prehistoric family sets off into the world in search of a safer place to call home. When they discover an idyllic walled-in paradise that meets all their needs, they think their problems are solved … except for one thing. Another family already lives there: the Bettermans.

The Bettermans (emphasis on the “better”)—with their elaborate tree house, amazing inventions and irrigated acres of fresh produce—are a couple of steps above the Croods on the evolutionary ladder. When they take the Croods in as the world’s first houseguests, it isn’t long before tensions escalate between the cave family and the modern family.

Just when all seems lost, a new threat will propel both families on an epic adventure outside the safety of the wall, one that will force them to embrace their differences, draw strength from each other and forge a future together.

The film is directed by Joel Crawford, who has worked on multiple DreamWorks Animation films, including Trolls and the Kung Fu Panda franchise, and is produced by Mark Swift (Captain Underpants: The First Epic Movie, Madagascar 3: Europe’s Most Wanted).