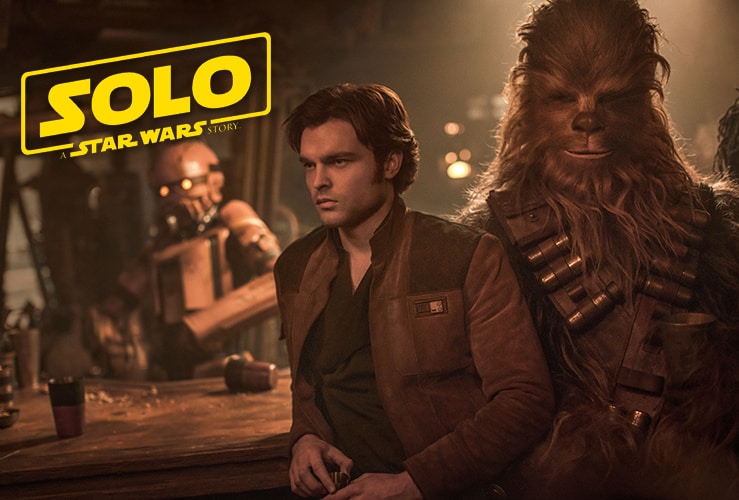 Every hero has a back story, but usually movies pick up later in the story line of a character and it’s hard to tell their reasoning for their decisions. It leads viewers to assume a lot about a character and sometimes this can change how you see the story. When fans were first introduced to Han Solo, he was a smuggler who picks up Luke in the original Star Wars movie. When we meet him initially he already has Chewbacca by his side is at the helm of the Falcon and off traveling through space. We hear about making the kessel run in 12 parsecs, and just have to assume it is part of his cannon. Even with that we fall in love with Han and know that even with his bad boy exterior he has a heart of gold and that carries us through all the way through the latest episodes.

But what happened before the original Star Wars movie? Solo: A Star Wars Movie gives us some perspective to the early years of Han Solo and will make fans fall in love with him even more. Alden Ehrenreich picks up the roll to play the character that Harrison Ford made so iconic. While Ehrenreich may not be well known to a lot of fans, he soon will be a name they wont forget. He embodies the roll of Han Solo, and brings wit, heart and the strength needed for the action scenes throughout.

Solo will be a movie that fans will either love or hate. Die hard fans will notice a major departure from the feel of the original movies, but this isn’t a bad thing. The movie is more of an action film and Han is more of a space cowboy (how he sees himself anyhow) and the movie plays that way. With little to no focus on the force, the movie gives a clear backstory of some of our favorite characters, their relationships and how they lead into the movies in the future.

Because the movie has such a different feel than the original trilogy, it would be a great way to introduce reluctant fans to the Star Wars Universe and ease them into understanding the characters and the Force, the Resistance and eventually the Dark Side that Han will fight against. Since we know where Han ends up, the movie has a set ending or destination for the character. The movie handles this well and brings in new characters that you will love (and some you will hate). There are enough one liners that lead to the original series, and hints to the original movies that while the movie feels a bit different than any other movie in the Star Wars universe, it’ll quickly feel like home.

Get ready for a lot of gun fights, a new droid you will fall in love with and of course a renewed love for Han Solo when you hit the theaters to see Solo! Tickets are now on sale everywhere that tickets are sold! For more information about in-theater events and giveaways visit StarWars.com. SOLO: A STAR WARS STORY opens in theaters everywhere on May 25th!