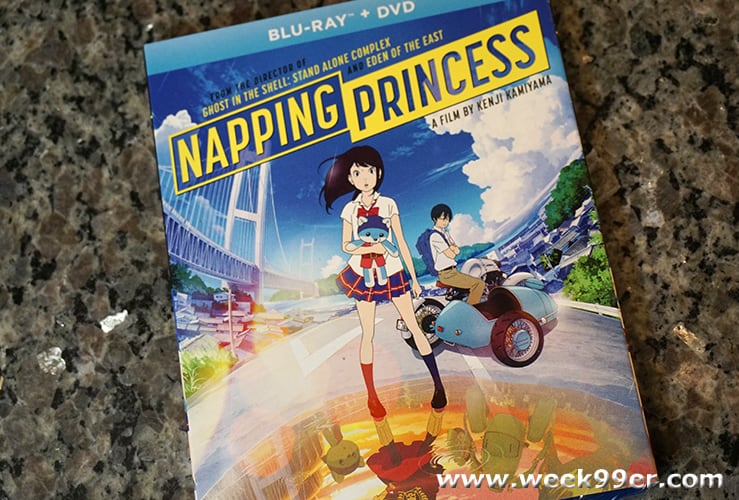 Step into the future and the world of technology with a brand new anime from GKids – Napping Princess. A mix of action, machines and interesting characters that will lead you on a journey of self discovery. Napping Princess is an anime for kids over 9 that will get them thinking, and one that you’ll want to add to your collection yourself. While its racking up awards itself, the movie is one that we enjoyed and think you will too. That’s why we’ve partnered with Gkids to give one reader a copy of the new film to enjoy at home!

From visionary director Kenji Kamiyama (Ghost in the Shell: Stand Alone Complex and Eden of the East) comes a sci-fi fantasy that effortlessly weaves together the rapidly evolving technology of today’s world with the fantastic imagination of the next generation, which was nominated for Best Animated Feature – Independent, at this year’s Annie Awards.

The year is 2020, three days before the opening of the Tokyo Olympics. While she should be studying for her exams, Kokone Morikawa often dozes off, entering a dream-world called Heartland full of fantastic motorized contraptions. But when her father, a talented but mysterious mechanic, is kidnapped for stealing technology from a powerful corporation, it’s up to Kokone and her childhood friend Morio to save him. Together they realize that Kokone’s dream-world holds the answers to the mystery behind the stolen tech, uncovering a trail of clues to her father’s disappearance and ultimately a surprising revelation about Kokone’s family.

With an ambitious mix of multilayered action, whimsical characters and inventive machines, Napping Princess is a genre- and universe-blending film that shows that following your dreams is sometimes the best way to discover your past.

Available in a Blu-ray/DVD combo and on EST/VOD, Napping Princess is now available on Blu-Ray and DVD.

One of our readers will win a copy of Napping Princess on Blu-Ray and DVD! Read how you can win below!

How Can You Win?
Enter to win with the form below. What is your favorite Anime? or Have you seen Napping Princess yet? If you do not do this entry – you will not win! So make sure you leave a comment and then enter using the form below!