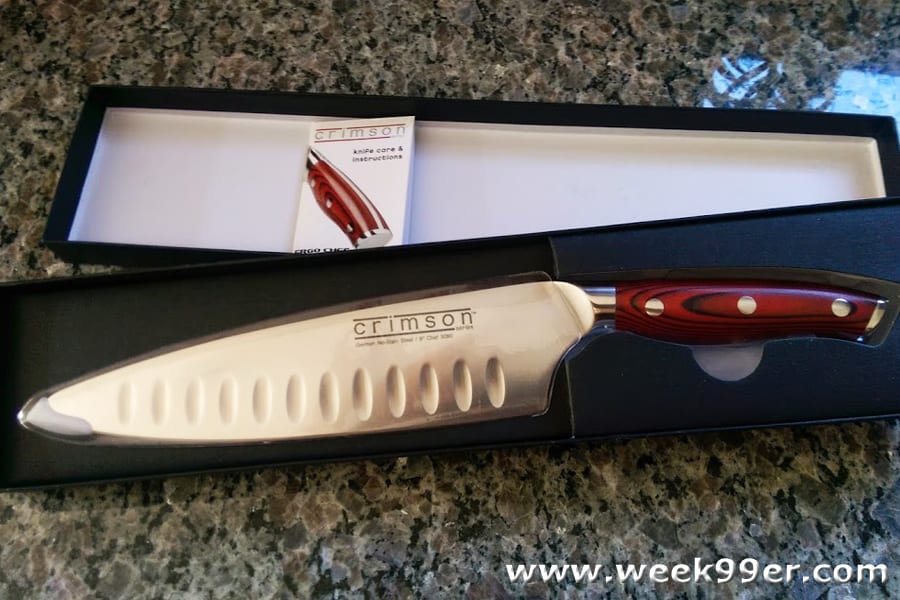 I’ve stated several times on the blog that I think the most important tool in the kitchen is a good knife. I’ve even gone as far as taking a knife skills course so that I could learn how to use the knives I had more efficiently, and safely. Knowing that I love knives (which that statement might scare some of my close friends), Harold Import Co sent me an 8 inch Chef Knife from Ergo Chef to test out and review. 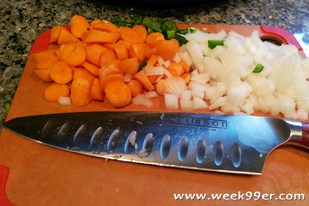 To be exact, I was sent an Ergo Chef Crimson G10 8″ Chef knife. What makes it better than any other chef knife you’d pick up at the store? The first answer is in the name itself – Ergo! The handle is ergonomic, so it fits to your hand, not only giving you better control while you work, but a more comfortable blade to cut with. It has a hollow core blade, with a 16-18 degree edge, allowing you flexibility of cutting. The blade also incorporates a scallop or Granton type edge so food wont stick to it and it allows you to have an overall smoother cut. This is something I’m use to seeing on my Santoku knives but not on a chef knife. 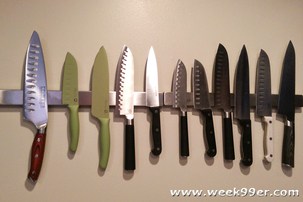 When I first washed the Crimson Chef Knife and added it to the bars with my other it not only stood out because of the curve of the handle but also the size. Compared to my other chef knives the overall blade was larger. The scallops are larger, and overall the working blade seemed larger than anything I had used before. The curve of the handle as well as the large blade made it easier for me to control, and actually to hold the knife properly with a pinch right after the handle. I felt over all that I had more control of it as I chopped, diced and sliced.

I will admit, the first time I used the knife it seemed like it was harder to use than my old standard knife. I placed it back up on the bar and grabbed my favorite again and chopped up the veggies I needed. But I didn’t give up after that first try, after all first impressions aren’t always right. Instead I just gave it a few days and tried again. The second time I used the Ergo Chef Crimson Chef Knife, everything cut smoothly, easily and quickly. I think the first time I was too close to the tip while I was cutting. But each cut since was smooth and clean. From tomatoes, to meat and even onions – it’s quickly becoming my favorite knife to use during meal prep. My knife skills still need some work, I know – but over time those will get better. And with a knife that not only is easy to control but provides great cuts that will be a lot easier for me to achieve as well.

The Ergo Chef Crimson Chef knife is only one of their overall collection, each with not only function but design and end user comfort taken into consideration. This is a great knife for anyone just starting out or even a seasoned cook, and is well worth the investment.