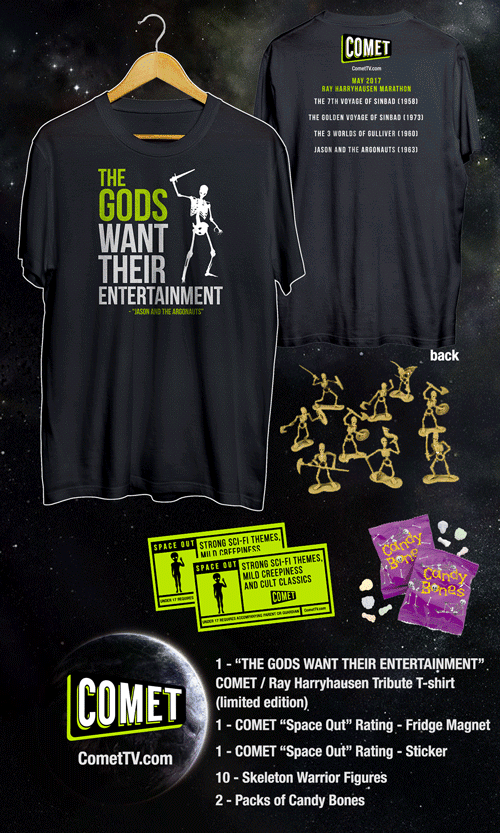 Movie effects would be no where without the work of Ray Harryhausen. His movies are classic and this month he’s being celebrated on Comet TV – including a fun giveaway with collectibles for fans. Ray Harryhausen, who we all know pioneered stop motion and visual effects for such films as Jason and the Argonauts, The 3 Worlds of Gulliver and The 7th Voyage of Sinbad, is being honored by Comet TV this month!

In case you couldn’t tell, we’re pretty big fans of old school movie monsters at COMET, and no one was more important when it came to making those famous beasts come to life than special effects pioneer Ray Harryhausen. Catch four of his classic films airing this month.

Jim Henson. George Lucas. David Bowie. When these three legends got together in 1986, an all-time cult favorite was born. We are, of course, talking about the nightmare-inducing puppet-filled ‘80s fantasy masterpiece known as Labyrinth. It’s one of those rare films that seems to get better each time you watch it.

Stargate SG-1 is back on COMET! Your favorite gate-hopping action series returns with back-to-back episodes Monday through Thursday at 8/7C, with encores of both episodes airing at 10/9C. That’s two chances, four times a week, to catch Jack O’Neill and his squad on their adventures across the galaxy. Indeed.

One reader will win a Ray Harryhausen Collectible Set. There’s all kinds of awesomeness in this set!

Entry-Form
Each household is only eligible to win Ray Harryhausen Collector Set Prize Pack via blog reviews and giveaways. Only one entrant per mailing address per giveaway. If you have won the same prize on another blog, you will not be eligible to win it again. Winner is subject to eligibility verification.