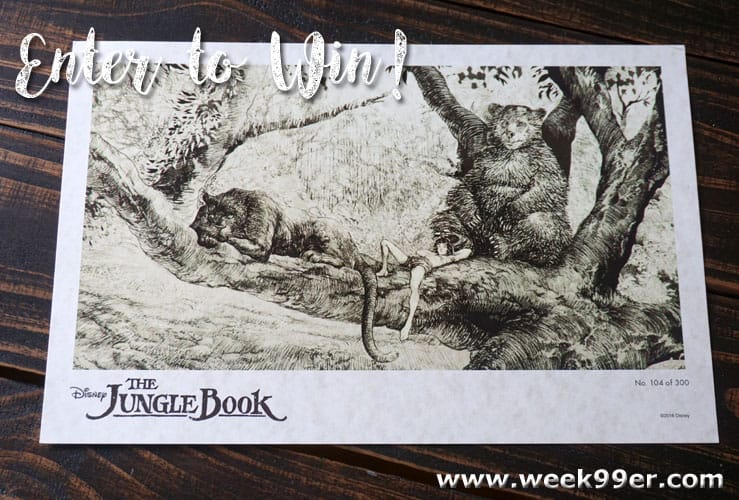 Sometimes the best things come in the mail! I received a fantastic package in the mail yesterday to celebrate the release of The Jungle Book on blu-ray and DVD – a numbered lithograph with a scene from the movie. Check it out – there are only 300 made, and the artwork is stunning! But even better, Disney is giving one of my readers one of these to hang on their wall as well. I absolutely love the cartoon version of the movie, and the new live-action movie takes your breath away. This is a special piece that you will love adding to your artwork collection and great for Disney fans! Read how you can win a lithograph of your own below!

About the Blu-Ray and HD Digital Release of The Jungle Book:

Audiences were mesmerized by Disney’s live-action epic adventure “The Jungle Book,” which has earned more than $949 million at the global box office to date.  Critically acclaimed, Jon Favreau’s stunning live-action reimagining of Walt Disney’s animated classic, will be available early on Digital HD and Disney Movies Anywhere on August 23, and on Blu-ray Combo Pack, DVD and On-Demand on August 30.

Venture behind the scenes with in-depth bonus features that reveal the innovative filmmaking technology used to create the richly immersive jungle world and characters; Follow the journey of the film’s only on-screen actor, charismatic newcomer Neel Sethi (Mowgli); Delve into a candid and humorous scene-by-scene audio commentary with director Jon Favreau and meet the all-star voice cast who help bring the film’s colorful characters to life, as well as the musicians who accent the adventure with a majestic music score.

Audiences will also have the opportunity to experience the movie again at select IMAX locations for a limited time only from August 26th through September 1st.

Day Shift Takes Viewers Back to the Camp Horror Genre

Get Passes to a Screening of Three Thousand Years of Longing