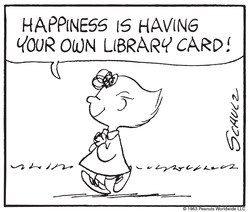 When the American Library Association approached Peanuts this year about joining forces to encourage children to get a library card and read, we knew this was a natural fit for us. Children have been learning to read by poring over Peanuts comic strips for more than 60 years- in newspapers and in comic books and now through the new digital app. Early readers discovered they could recognize classic catchphrases like “Good grief” and “Happiness is a warm puppy” – and later they learned even more complex ideas, like Lucy’s “Psychiatric help”! (My husband never talked down to children, and as a result, child readers have learned a tremendous amount.) 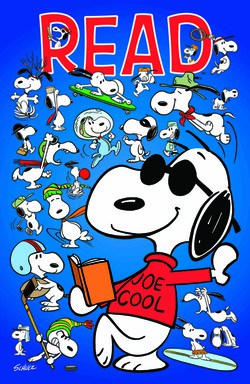 So I am thrilled, as I know Sparky would be, to know that the world’s most beloved beagle – himself the author of the novel that famously begins, “It was a dark and stormy night…” – is offering inspiration to a new generation of young readers. It’s especially rewarding that Peanuts is inspiring those children who may think that reading is beyond them…until they discover the joy of Sparky’s ingenious combination of inviting pictures and witty words.

In fact, studies have shown the benefit of using comic strips and comic books in education: They engage even reluctant readers and introduce them to the adventures that await inside a book. That’s why we’re particularly delighted to have Snoopy Cowabunga chosen as part of Andrews McMeel’s “Comics for Kids” program, with an online companion guide for teachers and parents suggesting ways to use the book as a teaching tool – in a natural and fun way!

I know personally the benefit of using comic strips as a tool for literacy – my brother, now close to 80, learned to read thanks to comic books!

Sparky himself was devoted to books. He read books on a wide variety of subjects, and drew many facts from them that went into the comic strips – thus sharing his interests with his readers.

And where better to find those books than in school and public libraries, which are such a vibrant part of our communities. Did you know there are more libraries than McDonald’s restaurants in the United States – more than 16,000 branches! And even though so many libraries have had to reduce their operating hours and staff, attendance at children’s programs and the circulation of children’s materials has increased in recent years. I find that tremendously encouraging.

I am a huge fan of libraries. I always took my children to our local library’s story hour. One of my first philanthropic efforts was to create a fund in my father’s name at his local library for a storytelling program for teens aged 13 to 15. And Sparky and I were supporters of the library at our local college, Sonoma State University.

So nothing pleases me more than to have Snoopy be our liaison with the American Library Association as he inspires children to come to their local or school libraries and discover the world of laughter and adventure that awaits them there!

As Sally said in one of my favorite of Sparky’s comic strips, “Happiness is having your own library card!”

Jeannie Schultz will be on WJBK-TV tomorrow 9/12 at 10:25 am! Tune into Fox 2 Detroit to see Jeannie’s Interview and learn more about the importance of children reading!