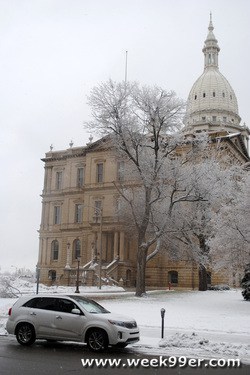 There’s no denying that Michigan is under one of the worst winters we’ve had in years. From the current snow fall and arctic vortex we’re under to the ice storm that encased the center of the state the week of Christmas. It’s been a long, hard winter already and we’ve still got a couple months to go.

Whether it’s icy roads, snow covered or clear I like to have a car that is tall enough and heavy enough get through some of the roughest conditions. The week before Christmas we were given a 2014 Kia Sorento to drive and review. It was a warmer day when the Sorento arrived, and I had no idea what it would be put through in the week we had it! 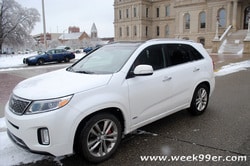 Our original plan for the Sorento was to fill it with presents for Christmas and take it to our family. It’s only a little over an hour away, and we had a quick stop at a wedding for a friend. Then the ice storm moved through mid-Michigan. We continued with our plans as usual but were in for a couple day trip of new experiences. From a wedding in a church with no heat or power, to driving in the capitol city without any traffic lights, ice glazed … well everything, and a massive family sleep over. 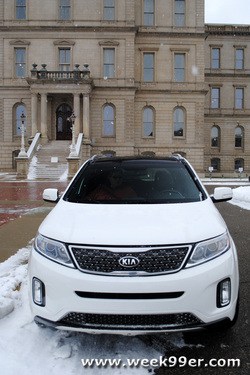 Despite the storm, the roads were fairly good, and there wasn’t too many bad situations for the Sorento to endure. A few snow banks and roads of pure ice in the smaller towns, but overall she powered through everything without a hesitation.

The 2014 Kia Sorento is a six cylinder SUV that has all of the power you want, and the space you need to get you pretty much everywhere. We filled the back with luggage, presents and could have easily had three more passengers in the back. The third row seating wasn’t needed but by being down it provided plenty of space for everything we brought accross the state. 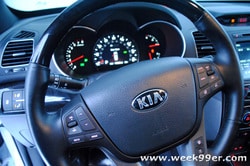 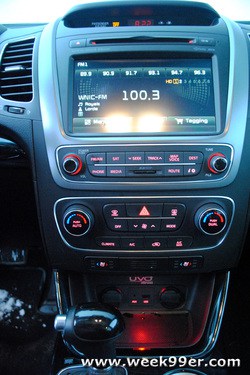 The majority of the other controls are in the center control panel. You can access the iPod Dog, CD player, UVO navigation, satellite radio, climate control (duo for the front passengers, and one of my favorite functions – heated seats. Those have got to be one of my favorite features in the new Sorento, as well as the other Kia models. But weather permitting, you can also have air conditioned seats – it’s not just on the cushion area, but actually thought the who seat itself, keeping you nice and warm (or cool) as you drive.

But to add to that, the Sorento also offers a heated steering wheel option. The control is on the panel to the left of the steering column and is a fantastic treat on those cold winter days. The steering wheel only stays on for about 30 minutes, but will warm your hands up on the coldest of days. 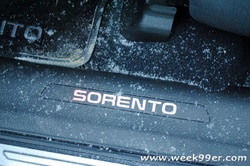 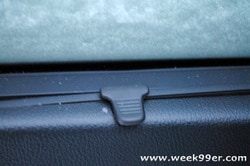 Some of my favorite features on the 2014 Sorento were simple design changes. From driver’s seats that fully recline (great for napping while someone finishing their Christmas shopping). To built in sun shades in the back seat. You simply pull the tab and attach it to the hooks built into the top of the window, keep the sun out of your passenger’s face without having to worry about suction cups, or hard bars that could be hazardous during an accident. Sometime’s its the simple design additions that can be the biggest selling features on a vehicle. 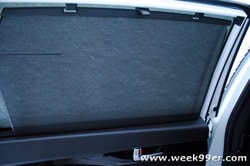 The new Sorento is large enough to seat up to 7 people with the third row up, but great for a small family as well. It made it through some of the iciest conditions I’ve ever experienced, held presents for a small army and kept us warm on our adventures through this winter wonderland!