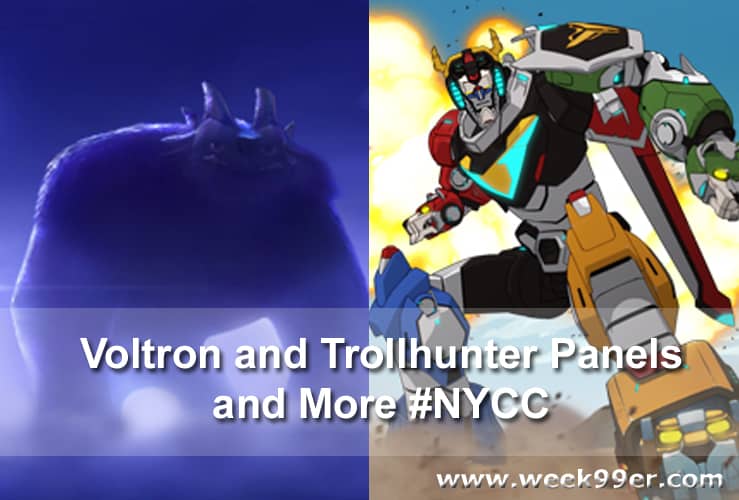 If you’re heading to New York Comic Con next week – first let me say how extremely jealous I am! Not only is there a huge agenda of great panels, activities and more – but it’s also Stan Lee’s last appearance! If you are going, be sure to hit some of the great panels and activities set up by DreamWorks and Netflix to promote Voltron Legendary Defender and Guillermo del Toro’s Trollhunters! Check out more about the events and the schedule below:

Join acclaimed filmmaker Guillermo del Toro as he and voice cast unveil DreamWorks Trollhunters at Madison Square Garden. Screen the pilot of this cinematic and groundbreaking animated series, slated to premiere worldwide on Netflix in December, which will raise the bar for kids programing and thrill the entire family.  Panelists include voice talent Kelsey Grammer, Ron Perlman and Steven Yeun, as well as executive producers Marc Guggenheim and Rodrigo Blaas. The panel will be moderated by Laura Prudom, television editor for Mashable.

Form Voltron! Fans will be treated to a sneak peek into the highly-anticipated second season of the Netflix original series and pop culture phenomenonDreamWorks Voltron Legendary Defender. Join executive producer Joaquim Dos Santos, co-executive producer Lauren Montgomery, story editor Tim Hedrick and voice actors Jeremy Shada and Bex Taylor-Klaus on the NYCC Main Stage for a special screening and a first look into what’s to come for Team Voltron. The panel will be moderated by Jim Viscardi, executive editor of ComicBook.com.

DETAILS ON PANELS/SCREENINGS AND ACTIVITIES (in chronological order):

Table 21 of Autographing Area at Javits Center (Hall 1-B)

A DreamWorks Voltron Legendary Defender signing with Joaquim Dos Santos, Lauren Montgomery and Tim Hedrick will take place from 1:00 PM – 2:00 PMon Friday at Table 21 the Autographing Area located in Hall 1-B of the Javits Center.

Location to be announced

Lion Forge Comics will host a signing in booth #1669 with writers of the Voltron Legendary Defender comic series Tim Hedrick and Mitch Iverson. A Voltron #1 New York Comic Con Exclusive Variant cover will be available at the booth, limited to 250 copies.

From the limitless imagination of acclaimed filmmaker Guillermo del Toro comes a tale of two worlds set to collide in the epic saga DreamWorks Trollhunters. When ordinary teenager Jim Lake Jr. stumbles upon a mystical amulet on his way to school one morning, he inadvertently discovers an extraordinary secret civilization of mighty trolls beneath his small town of Arcadia. Suddenly destined to play a crucial role in an ancient battle of good and evil, Jim is determined to save the world – right after gym class. A must-see viewing event for the entire family, DreamWorks Trollhunters will bring viewers of all ages around the globe into the rich and creative world of this all-new Netflix original series. Join creator and executive producer Guillermo del Toro alongside voice talent Kelsey Grammer, Ron Perlman and Steven Yeun and executive producers Marc Guggenheim and Rodrigo Blaas, as they discuss bringing this global television event to life and world premiere the first two episodes.