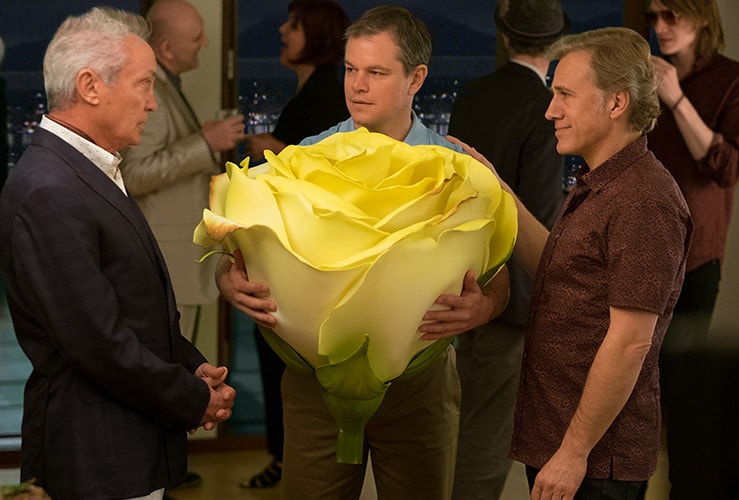 In his second leading role of the year, Matt Damon is back on the big screen in the new film Downsizing. Unlike any role he’s had to date, he plays Paul Safranek an occupational therapist who feels stuck in his life. With the invention of Downsizing, where people physically reduce their bodies to five inches tall – Safranek and his wife decide to take the leap to become small – where their money will allow them to live like the rich and have a better life.

As anyone can expect with a set up like that, things wont go as planned. And as shown in even the trailer, his wife doesn’t go through with the procedure. Paul, now shrunk down to only five inches is left alone in his new community without anyone to rely on. Starting out bitter and dark, the character has to go through a transformation of his own and in the literal sense find out where he fits in the world.

Downsizing from the teasers alone looks like a fun comedy that you can spend a good couple of hours laughing at. It does deliver in the laughs and is overall a very enjoyable movie. Throughout the movie is a strong messaging of ecological conservation (as the reason for Downsizing to start) and human beings impact on the world. The movie doesn’t get overly preachy but also focuses on helping others less fortunate than yourself – definitely not a bad thing. Buried between bouts of nudity (brief and male) and a lot of cursing overall the movie has a lot of heart. It is a fun movie to watch however there are parts that leave you wanting afterwards.

One thing we loved about Downsizing was that it takes a lot of typical things you seen in large Hollywood Blockbusters and ignores them. From non-typical love interest, to not relying on typical general roles (including the nudity) to drive a film. It’s a nice change from what we’re use to seeing. 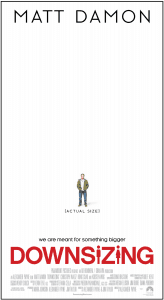 Downsizing imagines what might happen if, as a solution to over-population, Norwegian scientists discover how to shrink humans to five inches tall and propose a 200-year global transition from big to small. People soon realize how much further money goes in a miniaturized world, and with the promise of a better life, everyman Paul Safranek (Matt Damon) and wife Audrey (Kristen Wiig) decide to abandon their stressed lives in Omaha in order to get small and move to a new downsized community — a choice that triggers life-changing adventures.