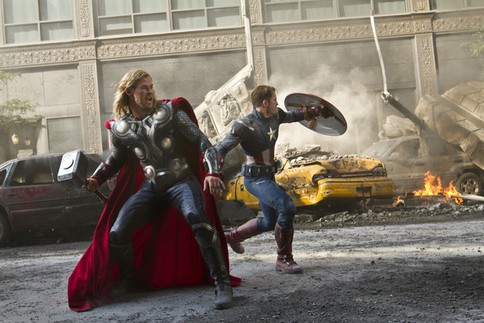 Do you have plans this weekend? If not, you should definitely go check out the new Avenger’s movie!
Last night I was in a very lucky group of people who were able to see Marvel’s the Avengers in 3D!

Now we all know by now that I’m a dork, I love trivia, facts and movies. But I have never considered myself a comic book dork. I’ve seen most of the Marvel comic movies with my boyfriend but there are a couple I haven’t seen yet. But that didn’t matter when it came to the new movie. (And there is some nice eye candy!)

The Avengers is full of action, comedy and fantastic in 3D!

Check out the trailer of the movie! You can watch your favorite Marvel characters like Iron Man, the Hulk, Thor and more fight for the fate of the world! If they can get over their own personal differences first!

The movie is rated PG-13 due to some swearing and violence, but any age Marvel fan will like it! And if you’ve missed a couple of the movies, you aren’t missing out on a ton of information to understand the movie!

The audience was laughing and cheering on their favorite heroes! Trust me, you wont want to miss this movie!