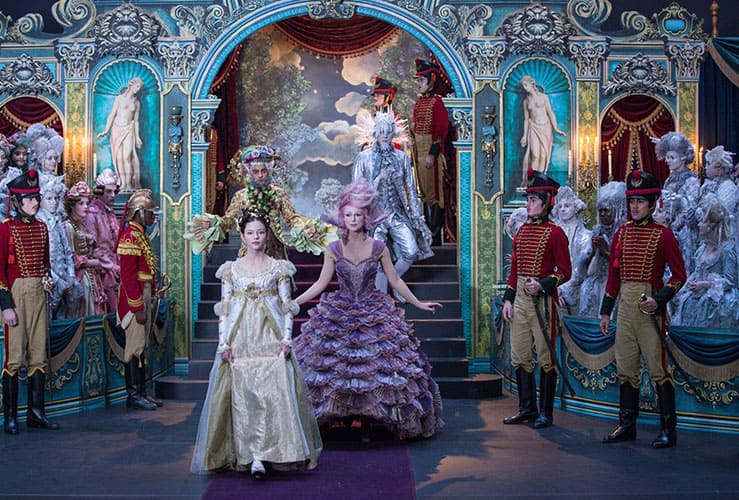 Nothing says the holiday season more than the magic of the Nutcracker. But as Disney takes the story and makes it into a full length film with additional story added to the classic ballet – does the story still relate to the holiday classic? Disney’s Nutcracker is their main release this year for the Christmas season, but it seems like it may be pushed under the radar once Wreck it Ralph and Mary Poppins join it in theaters in the next few weeks.

The Nutcracker and the Four Realms is loosely, very loosely based on the ballet that families watch every holiday season. Bringing to the screen Clara who is transported into a magical world where toys come to life. But the Four realms are in peril and she must find a way to save them.

What we loved about the movie:

But unfortunately, the story departs greatly from the ballet we loved. There are hints of the music throughout, and yes, there is Misty Copeland dancing for a few minutes. But the movie almost seems like it only is a nod to the original story and loses some of the magic to it. With big names promoted as we waited for the film to release like Helen Mirren, Morgan Freeman and Keira Knightly most of them had small parts that only last a few minutes in the film. With the exception of Knightly who’s Sugar Plum Fairy was almost distracting with the saccharine voice she put on for the character. The movie has several scary parts for younger children that were actually shocking to see in this story.

While The Nutcracker and the Four Realms will become a holiday favorite for many people, it may be the difference of if you go in knowing it’s a complete departure from it’s name sake or not knowing the story before hand. One major wish we had for the film was they highlighted Misty Copeland more, since her dancing, beauty and strength is an inspiration to women and girls everywhere. It seemed her dancing was more in the credits than as her part on the screen.

THE NUTCRACKER AND THE FOUR REALMS opens in theaters everywhere now!