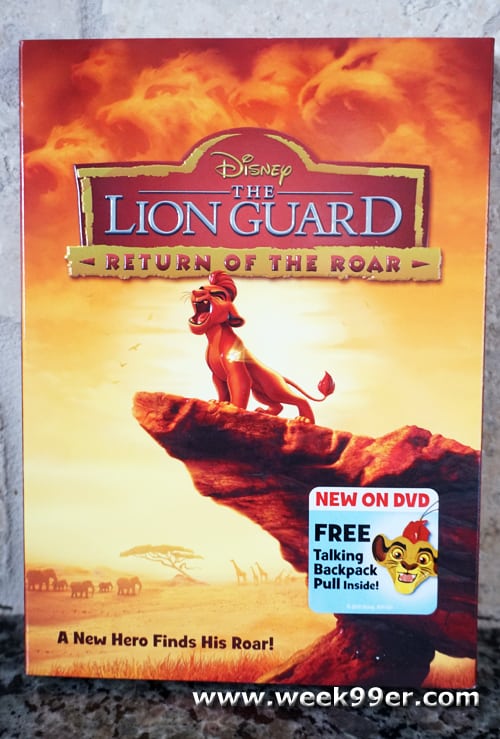 When the Lion King first came out I was the perfect age, not only was it a fantastic story with great animation – it had songs that we loved and could sing along with long after its release. It quickly became a family favorite, and even in adulthood we love the movie and the live musical version. The story of course continued in Lion King 2, and Lion King 1 1/2, but then there was a bit of silence where the story left off. That is until Disney Junior brought back The Lion Guard, and recently released The Lion Guard: Return of the Roar. Disney sent us a copy of the new movie, and a great prize package to give to one reader.

The Lion Guard is a the story of Kion, Simba and Nala’s second son who is destined to rule the Lion Guard since his sister Kiara will one rule the pride. While heading the Lion Guard is a lot of responsibility, it’s not as scary as ruling Pride Rock. Return of the Roar is the tale of how Kion assembles the Lion Guard, an unlikely set of heroes in the making. Kion is on the hunt to find people to help protect Pride Rock, and he’s looking for the Strongest, the Bravest, the Fiercest, the Keenest of Sight and the Fastest. Together the Lion Guard comes together to help protect the area, and Kion not only finds friendship but his own self in this new adventure.

Check out a Kion’s first Roar:

You can find The Lion Guard: Return of the Roar online and everywhere now! It is rated TV-Y and has a total run time of 44 minutes. The DVD has bonus feature of the music video – Beau Black performing “Here Comes the Lion Guard” 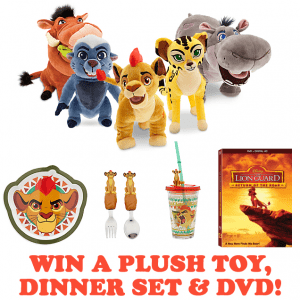 One reader can win a great Lion Guard Prize pack! Here’s what you can win:

Enter to win with the form below. The mandatory entry is leaving a comment on this blog post telling me: What your favorite character from the Lion Guard or the Lion King. Or who would get the prize pack if you win! If you do not do this entry – you will not win! So make sure you leave a comment and then enter using the form below!

83 thoughts on “Disney’s Lion Guard: Return of the Roar Giveaway!”