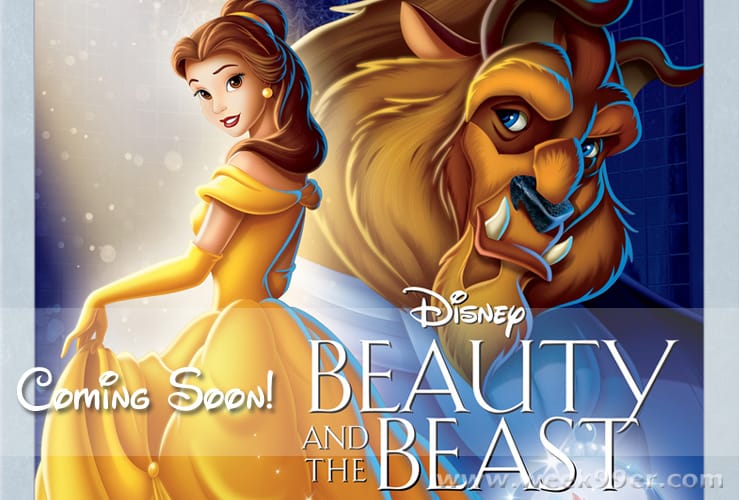 Like most little girls, I was in love with Disney Princesses (and let’s face it – I still am). All little girls have one they latch onto for one reason or another, and one of my favorites has always been Belle. Not only was she a strong character, but she was intelligent and beautiful too. We all remember that library scene, and even as a little girl of around eight years old – I was in love and it was my dream to have a library like that some day. The whole movie exudes beauty, and the songs are ones that will stick with you for years to come.

Walt Disney Pictures’ magical animated classic “Beauty and the Beast” captures the magical journey of Belle (voice of Paige O’Hara), an independent and intelligent, modern-day heroine who’s taken prisoner by a hideous beast (voice of Robby Benson) in his castle. Despite her precarious situation, Belle befriends the castle’s enchanted staff—a teapot, a candelabra and a mantel clock, among others—and ultimately learns to see beneath the Beast’s exterior to discover the heart and soul of a prince.
“Beauty and the Beast” was nominated for six Academy Awards® and was the first animated feature to receive an Academy Award® nomination for best picture. It won two Oscars®, including best song, by the renowned Alan Menken and Howard Ashman, and best original score (Menken), as well as a Golden Globe Award® for best comedy/musical.
“Beauty and the Beast” was Disney’s first animated film adapted into a Broadway musical, which ran for 5,464 performances from 1994-2007 and has delighted more than 35 million people worldwide. On March 17, 2017, audiences will experience the thrilling retelling of the original tale through Disney’s live-action film, “Beauty and the Beast,” in which Emma Watson (“Harry Potter” films) plays Belle and eight-time Oscar® winnerAlan Menken returns to recreate his Academy Award®-winning music score.