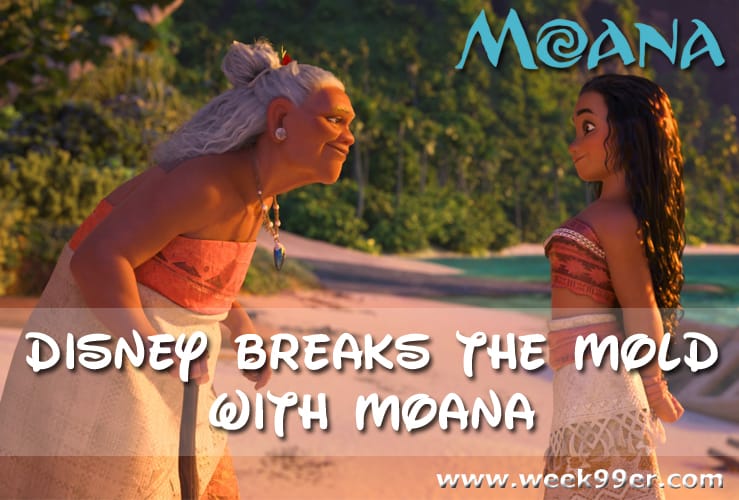 As long as there has been Disney Princess movies, there has been a certain formula to the story. Girl put in a perilous situation, waits to be saved and true love saving the day. As long time Disney fans we started to see a departure from this formula in Frozen, where it was sisterly love that saved the day and the prince was actually the bad guy. But in their latest release Moana – it is the “princess” herself that is the hero, she doesn’t rely on someone else to save her.

We caught an advanced screening of Moana, and besides amazing graphics gives viewers a complete departure from the Disney Princess model. Long gone is the damsel in distress, instead you have Moana the daughter of the chief of her village – so not technically a princess. The young teenager is next in line to rule the people of her island. As she battles her inner urge to go beyond the reef and see the world, Moana becomes resigned to her position and role in life. But then the island they rely on for their livelihood begins to die around them, she ends up going on a quest to find Maui the trickster demi-god to restore the heart of the islands and save her home.

Moana (voiced by Auliʻi Cravalho) is a strong and demanding figure in her own right, and is only a teenager. As mentioned by Maui (voiced by Dwayne Johnson) mentions she is a princess, and even has an animal side kick (the typical Disney model). However, being the leader of her people she adamantly denies being a princess. Another notable departure from the Disney Princess model is the fact that both of Moana’s parents are alive – this is actual a huge departure from most Disney movies. She even has the guidance of her eccentric Grandma Tala to guide her to her place in the world. This is a nice change from some stories based on fairy tales we’re use to  and have grown up with.

The story of Moana is an original one that took years to develop. Moana is based in Oceania, what we know as the Polynesian island region. The movie takes place thousands of years ago, and is based on mythology from multiple islands in the region. Using local actors, music consultants and more to develop the final story and movie. While there are a few moments that may make the under 5 audience jump, the movie has an underlying story of friendship, family and courage. Look past the beautiful graphics and animation, and you’ll find the first Disney Princess that has shattered the traditional mold and hopefully sets a precedent for future movies and stories.