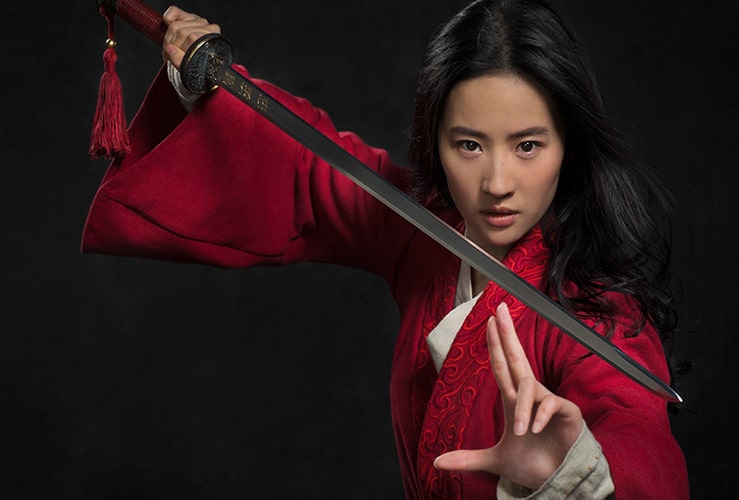 Growing up, Mulan was one of my favorite animated movies to watch over and over again. It’s filled with girl power, and everything that my parents told my sister and I – we could do whatever we wanted in our lives, and being a girl didn’t stop us. I will admit, there are times I still put it on to belt along with the songs (that I still know all the words to of course) and will get stuck singing the songs for hours after the movie stops. Yesterday, Disney announced they’ve started production on the live action version of Mulan and while we’ve heard murmurs there wont be musical numbers in it – we’re more than excited to see this story come to life. Not only is Mulan a great role model, but there are so many reasons to get excited about this movie. To say we’re geeking out would be an understatement.

In the animated version and the story of Mulan, she steps up to the plate and goes to fight war along side the men from her village and the ones from surrounding areas. She doesn’t take the fact into account that traditional roles for girls may not mean she’s the best option for the job. Instead she takes her father’s place and fights under the guise of being a guy and not only stands her ground with them, but can hold her own in a fight against any enemy. Right here, Mulan is the ultimate sign of girl power.

Mulan is Based on Folklore that is Still Taught Today

The story of Mulan is still part of Chinese curriculum for children today. There is speculation if she actually existed or not, or is a combination of a couple of different women warriors from the time period. But the story resonates centuries later and is one that is a great role model for both girls and boys. Not only can you change what society expects of you, but you can forge your own path as you do it.

The Ballad of Hua Mulan is a poem that dates back to the 4th or 5th Century China. Read more about it the Ballad of Mulan.

The Story Will Captivate You

If you haven’t seen the animated version of Mulan yet, now is the time to do it. We highly suspect the new version wont have a spirit guide with quite the attitude in the new version (but Disney can always surprise us). But the story of Mulan is fascinating on it’s own. A girl warrior who will protect her family, her village and country without thinking of her own safety first. Her story is the ultimate one of girl power, of family commitment and one to her community as well. It has real life lessons we all hope to see in our own lives as well as the children in our family.

Production on Disney’s “Mulan,” a live-action adaptation of the studio’s 1998 animated feature, has begun. The film will shoot on locations in New Zealand and China and will open in U.S. theaters on March 27, 2020.

“Mulan” is the epic adventure of a fearless young woman who masquerades as a man in order to fight Northern Invaders attacking China. The eldest daughter of an honored warrior, Hua Mulan is spirited, determined and quick on her feet. When the Emperor issues a decree that one man per family must serve in the Imperial Army, she steps in to take the place of her ailing father as Hua Jun, becoming one of China’s greatest warriors ever.

“Mulan” is directed by Niki Caro (“Whale Rider,” “McFarland USA”) from a screenplay by Rick Jaffa & Amanda Silver (“Jurassic World,” “In the Heart of the Sea”) and Elizabeth Martin & Lauren Hynek based on the narrative poem “The Ballad of Mulan.” The producers are Jason T. Reed (“Teenage Mutant Ninja Turtles”), Chris Bender (“A History of Violence”) and Jake Weiner (“Criminal”) with Barrie M. Osborne (“The Lord of the Rings: The Return of the King“), Bill Kong (“Crouching Tiger, Hidden Dragon,” “Monster Hunt”) and Tim Coddington (“Crazy Rich Asians”) serving as executive producers.

Disney’s animated feature, which was released in 1998, starred Ming-Na Wen, Miguel Ferrer and Eddie Murphy and was nominated for an Oscar® and two Golden Globe® Awards.

The story of the legendary warrior is one of China’s most popular folktales, and is still a part of the curriculum in Chinese schools today.