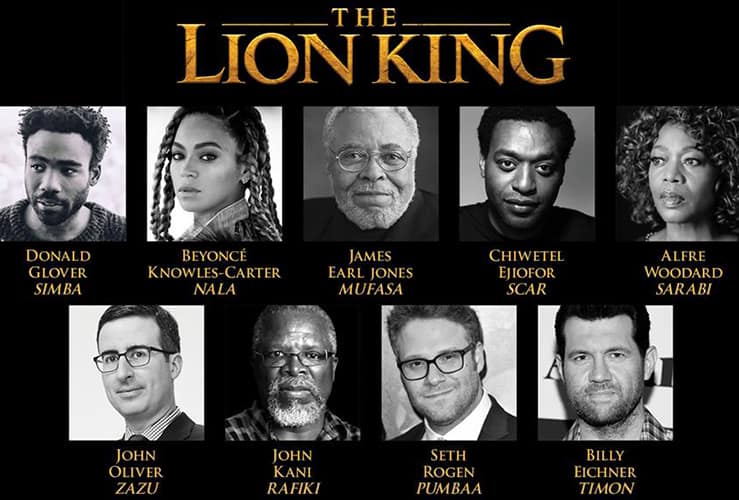 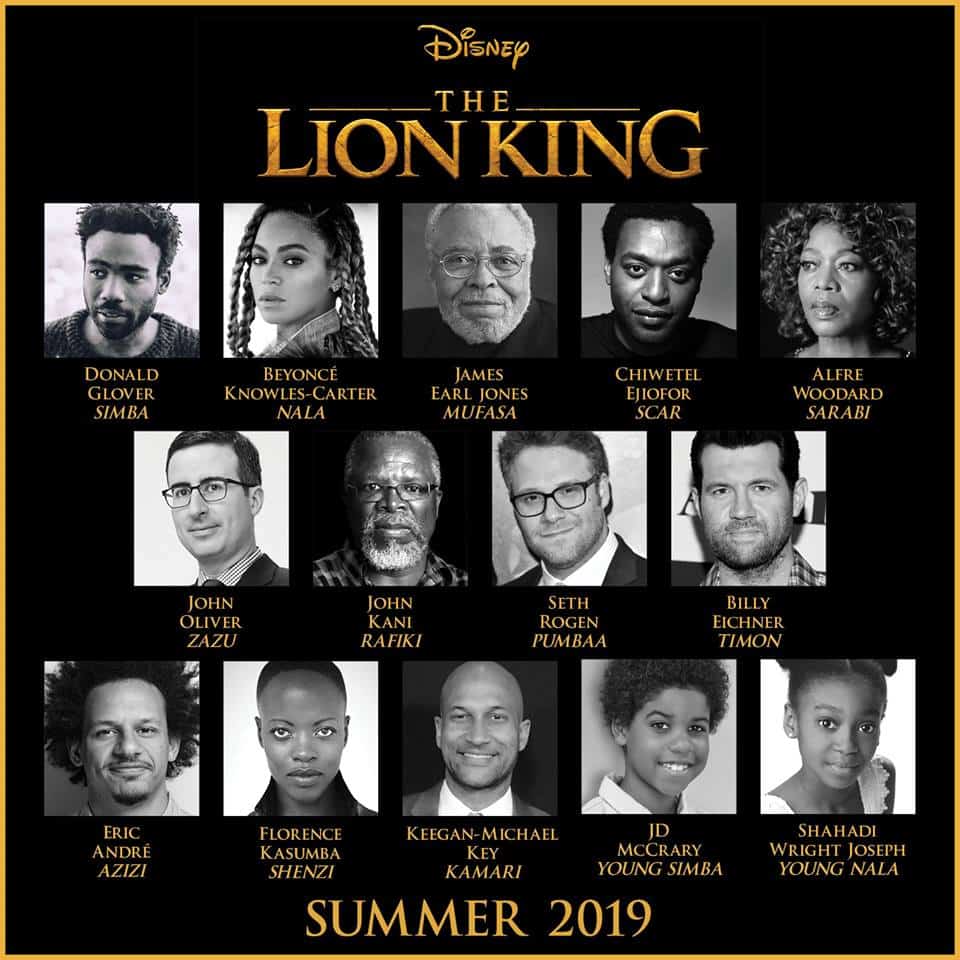 You’d be hard pressed to find someone who doesn’t know the story of The Lion King. From the animated classic movie, the Broadway musical, the books, the toys or even The Lion Guard. It’s a story we all know and love. And coming in 2019, Jon Favreau is bringing the live action version to the big screen. With the CGI magic he used in The Jungle Book, this story is coming to life, and now with an amazing all-star cast. Disney announced the cast earlier today, and the cast lineup is absolutely amazing.

Check out the cast announcement from Disney below:

The all-star lineup for director Jon Favreau’s new take on Disney’s 1994 classic animated film “The Lion King” includes stars from the film, TV, theater and music arenas. Featuring pioneering filmmaking techniques, the film welcomes back to the big screen iconic characters that audiences have long treasured—but in a whole new way. From Disney Live Action, “The Lion King” is slated for U.S. theaters on July 19, 2019.

“It is a director’s dream to assemble a talented team like this to bring this classic story to life,” said Favreau.

“The Lion King” is directed by Favreau (“The Jungle Book,” Marvel Studios’ “Iron Man”) and produced by Favreau, Jeffrey Silver (“Beauty and the Beast,” “Edge ofTomorrow”) and Karen Gilchrist (“The Jungle Book,” “Chef”). Jeff Nathanson (“Catch Me If You Can,” “Pirates of the Caribbean: Dead Men Tell No Tales”) penned the screenplay based on the 1994 screenplay by Irene Mecchi, Jonathan Roberts and Linda Woolverton. Tom Peitzman (co-producer “Kong: Skull Island,” “Alice in Wonderland”) and Thomas Schumacher (“The Lion King,” “Beauty and the Beast”) are executive producers, and John Bartnicki (“The Jungle Book,” “Chef”) is co-producer. The award-winning team of artists tapped to bring the African savanna and its animal inhabitants to life include visual effects supervisor Rob Legato, who conceived the virtual production on “Avatar,” won Academy Awards® for his work on “The Jungle Book,” “Hugo” and “Titanic,” and was nominated for an Oscar® for his work on “Apollo 13.”

The film’s animation supervisor is Oscar®-winner Andrew R. Jones (“The Jungle Book,” “Avatar,” “World War Z”). VFX supervisor is Adam Valdez (“The Lord of the Rings: The Fellowship of the Ring,” “The Lord of the Rings: The Two Towers”), who won an Oscar for his work on “The Jungle Book.” Five-time Oscar nominee Caleb Deschanel, ASC, (“Jack Reacher,” “The Patriot”), is director of photography, and James Chinlund (“War for the Planet of the Apes,” “Marvel’s The Avengers”) serves as the production designer. Oscar winner Ben Grossman (“Alice in Wonderland,” “Hugo,” “Star Trek into Darkness”) is virtual production supervisor, and Mark Livolsi, ACE, (“The Jungle Book,” “Saving Mr. Banks,” “The Blind Side”) and Adam Gerstel (“Transformers: The Last Knight,” “The Jungle Book”) are editors. Hans Zimmer (“Dunkirk,” “Hidden Figures”), who won an Oscar for his score for the animated classic, will score the adventure.

From Disney Live Action, director Jon Favreau’s all-new “The Lion King” journeys to the African savanna where a future king is born. Simba idolizes his father, King Mufasa, and takes to heart his own royal destiny. But not everyone in the kingdom celebrates the new cub’s arrival. Scar, Mufasa’s brother—and former heir to the throne—has plans of his own. The battle for Pride Rock is ravaged with betrayal, tragedy and drama, ultimately resulting in Simba’s exile. With help from a curious pair of newfound friends, Simba will have to figure out how to grow up and take back what is rightfully his. The all-star cast includes Donald Glover as Simba, Beyoncé Knowles-Carter as Nala, Chiwetel Ejiofor as Scar, James Earl Jones as Mufasa, Billy Eichner as Timon and Seth Rogen as Pumbaa. Utilizing pioneering filmmaking techniques to bring treasured characters to life in a whole new way, “The Lion King” roars into theaters on July 19, 2019.