When Goonie was a toddler, one of his favorite things was for me to read to him. The problem is, I didn’t always read things how he wanted me to! He’s always had a love for anything with an engine, and of course dinosaurs. When we found the Dinotrux books by Chris Gall, he was in heaven. But I never could read the names right or get their voices (the ones he imagined them to be) perfect. As soon as I heard that DreamWorks was partnering with Netflix to release an animated series of Dinotrux, I knew he’d be an instant fan. I was given a sneak peak of the new episodes, and got to sit down with the producers to talk. 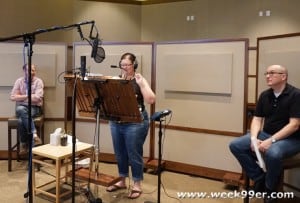 During my time at DreamWorks, we were able to experience a lot of different things – including a recording session with two of the main characters. Ty Rux is a Tyrannosaurus Trux, and Revvit is a razor-sharp Reptool. Normally they wouldn’t be friends, but by working together the Trux and Reptools can achieve great things. Each of the bloggers got to work on doing the voice over of the scene (don’t worry, this wont appear on your TV anywhere), and even though we had one line – it’s not as easy as you’d think. While recording, you have to make sure you match the mouth movement or flap of the character, and make sure you’re that you keep pace with them. Since they’re animated and rigid characters, it’s a little easier since their mouths only move up and down. But getting it right on the first go isn’t going to happen. My first take – I actually completely missed my cue and said “oh crap!” instead of my line. After a few more takes, the extremely talented sound guy at DreamWorks was able to get all the words he needed from me to put the clip together below. As much work as went into one line, I can’t imagine the amount of work it takes to do a whole show or even a longer feature!

I never imagined I’d be in a sound booth doing a voice over, it was an exciting experience and a lot of fun. I’m sure that I still haven’t got the voices right according the Goonie, but I can’t wait for him to watch this clip and see the new show!

You can get a preview of the new Dinotrux show below, and check out the first 10 Episodes when it premiers on Netflix on August 14th!

2 thoughts on “Dinotrux First Look and Voice Over Session! #Dinotrux”