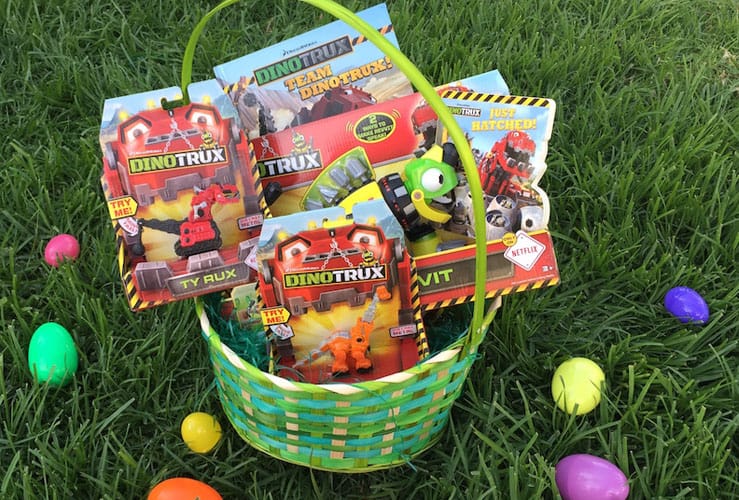 Easter is just around the corner and we’ve partnered with DreamWorks for a great Dinotrux gift basket giveaway! These baskets are going to be packed with fun DinoTrux goodies for your little one, and a great way to celebrate season 2 of DinoTrux being available on Netflix today!

If you’re not familiar with Dinotrux – here’s a bit about the show!

Welcome to a world of giant creatures that are half dinosaur, half construction vehicle and all awesome in DREAMWORKS DINOTRUX! Meet Ty Rux, a massive Tyrannosaurus Trux, and his best friend Revvit, a razor-sharp Reptool.  Together, the Dinotrux and Reptools join forces for the first time ever to build a bigger, better world and battle back against the biggest and baddest of them all: D-Structs, who threatens to wreck everything they’ve built.

This very special Easter prize package includes a random assortment of 6-8 exciting Dinotrux toys & books! And there will be two winners!

DINOTRUX toys from Mattel include assorted characters in both the die-cast and Sights & Sounds collections, now available at Toys “R” Us, Walmart and Target!

DINOTRUX books include an assortment from the upcoming LB Kids line, arriving in stores April 5th, 2016! Titles include the following:

Check out an all new clip from DinoTrux Season 2 below!

Enter to win with the form below. The mandatory entry is leaving a comment on this blog post telling me: Which is your favorite DinoTrux or RepTool? or Who would get this basket full of goodies if you won? If you do not do this entry – you will not win! So make sure you leave a comment and then enter using the form below!