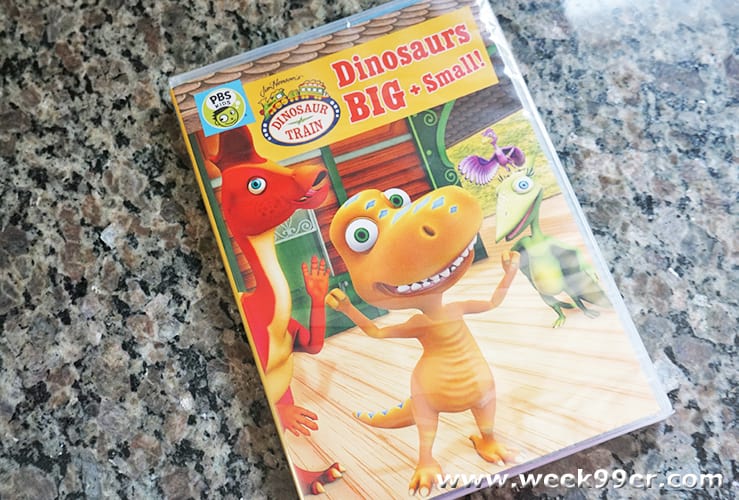 Buddy and all of his friends are back in a new collection of Dinosaur Train episodes! PBS Kids has just released a new set of 10 episodes for the preschool aged viewers. Each episode is wrapped around learning something new and making new friends along the way.

In the new Set Dinosaur Train: Dinosaurs Big and Small, the episodes all revolve around the differences that can be found in different parts of the world and what makes them unique. Teaching kids that differences aren’t always a bad thing and that they are what make us individuals. The episodes are adorable and ones that your kids will want to watch again.

You can get your copy of Dinosaurs Big and Small on DVD now! It has a total run time of 142 minutes and is rated G.

“Dinosaurs Big and Small” contains 10 fun-filled adventures with Buddy, the Tyrannosaurus Rex, his friends and adoptive Pteranodon family, who travel on a special train and explore the world. In How Many Horns, best friends Buddy and Tank Triceratops share a love for comparing features. Tank, who has 3 horns, wonders why Mayor Kosmoceratops has 15, and Protoceratops has only 1. Buddy, Tank and the gang go on a quest to track down Ceratopsians, and they end up meeting “the Queen,” an amazing Late Cretaceous Regaliceratops, who has a very decorative frill that almost rivals Kosmoceratops for number of horns. Then, the gang heads to Jurassic China in The Tiny-Saur Train, where the search is on to find the tiniest dinosaur of all. In We’re Not All Dinosaurs, the Pteranodon kids meet a new, small mammal friend, Adele Alphadon, and introduce her to their Big Pong friend, Cindy Cimolestes, to a new concept – that not all Mesozoic creatures are dinosaurs! And in Clubhouse of Their Own, the kids want their own hangout that’s separate from the family nest. They try out several locations, but none of them are the right fit. But with the help of Mom and Dad, the group builds their own clubhouse using natural materials.