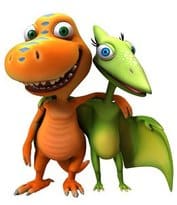 Do you have a little one in your house? If you do I’m sure you’ve heard of the show Dinosaur Train on PBS. We hear it non-stop “DINOFAUR TRAIN!” He loves cars, trains and Dinosaurs. Right now he’s really into Trains and Dinosaurs and anything that combines the both of them – is golden. Even on our recent family trip, we had to special order Dinosaur Train DVD’s to keep him entertained on the the two day car trip. 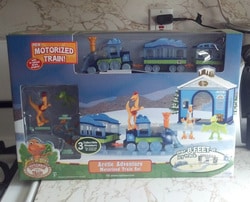 When I was contacted my TOMY Toys to do a review on the new Arctic Adventure Motorized Train Set by Dinosaur Train – I jumped. He has a Dinosaur Train set, but it was manual. He loves it so much it even came on the cruise with us. We heard all about Mr. Conductor and Daphne and all the other characters. The train did crash a few times off the bed too. 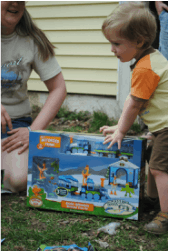 The new motorized train is for ages 3 and up. What luck – his third birthday was right around the corner! He opened some of his present and wanted the “one in the monkey paper” and squealed to find his new Dinosaur Train set. He demanded it was opened right then, but we had to reassure him it was an inside toy and would be put up in his room soon.

After all of his gifts were opened, he said “I’m done – let’s go play with the train” He even told us he didn’t want cake or ice cream, he just wanted to play with his train set! His bubbles, and other toys didn’t keep his attention, about every 5 minutes like clockwork he was back at the train set staring at the box.

In one of the few minute breaks he was distracted, I took the new Dinosaur Train set and assembled it in his room. I just finished when he came running in his room with his friends. I didn’t quite have the tunnel assembled yet, but the train was running around the track and the conductor station was standing. (I was later informed he was demanding a train station recently – so this was perfect!) 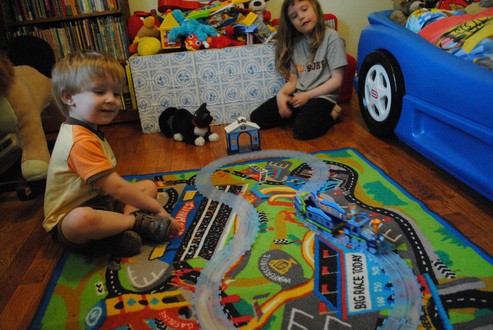 Just look at the smile on his face! The train does take two AAA batteries, and starts with a simple tap of the smoke stack. I had to explain to him that he could not pull it backwards and that he had to be gentle with the smoke stack to turn it on – but he quickly got how to play with it.

To say my nephew loves it –  would be an understatement. Check out the picture below my sister text me the next night – he refused to go to bed because he was playing with his new train. I also was informed this weekend that he’s played with it so much that he’s already ran through one set of batteries!

The train set, station, and tunnel are super easy for plug and play – even the train is easy to assemble. It does require a screw driver to put the batteries in – and scissors will be required to get everything out of the box. As much as the kids want to help with this part – that’s more the parent’s/aunt’s/uncle’s/grandparent’s job.

One thing we found out as he tried to add on every train car he has to the train (he has a ton of them) – the motorized train will NOT pull them all. The toy has a motor that handles a few of the train cars, so don’t overload it. We have a large collection of cars, probably more than the 8 feet of track so once he knew how many he can use he stuck with it.

He also loves the tunnels – they’re a simple addition, but he loves driving through tunnels and it’s super neat that his train can now too!

TOMY Toys is allowing me to give one Arctic Adventure Motorized Train Set to one lucky fan – so make sure you ENTER TO WIN!

This product was provided to me by TOMY Toys. All opinions stated are my own.

New Minions: The Rise of Gru Toys Will Bring Out the Laughter for Kids of All Ages