Skip to content
Today the city of Detroit celebrated RoboCop Day, and movie buffs as well as city supporters from all over the metro area gathered to meet RoboCop himself! Not only did both versions of the movie (1987 as well as the new release), but they were filmed here in the city, bringing in jobs as well as city pride. 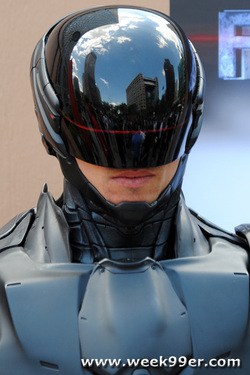 As a metro-Detroiter I was excited to hear that RoboCop himself would be greeting people in downtown Detroit. Not only did the event coincide with the new Blu-Ray and DVD release of the 2014 remake, but it also was suppose to be the official unveiling of the RoboCop statue. While the statue unveiling has been delayed slightly, guests were still greeted by RoboCop, fresh cupcakes from Just Baked bakery and t-shirts and bracelets to help promote the new movie release.

We’re big movie buffs in our house, and have a copy of the original movie and can’t wait to add the remake to our collection. It’s nice to see local landmarks in the movie and recognize a lot of the sights. There are some scenes that locals will notice are a bit out of place for our area – but watch it and see if you can spot them!

Looking to get a copy of the new RoboCop movie? It is available on Blu-ray and DVD on Amazon and stores near you!

So what’s with the Statue? Back in 2011 a Kickstarter campaign was launched to have a life sized statue of RoboCop built in front of Michigan Central Station by the Imagination Station art movement. It’s still under construction, and almost done from my understanding – so we can expect to see that soon! Fans of the film and the city both are excited to see this fully funded campaign come to life. You can even check out a special message to the people of Detroit from the Original RoboCop Peter Weller (below).

Besides his stops at Campus Martius park and the Filmore theater in Detroit today, RoboCop has been spotting fist bumping the Joe Louis statue, wandering the streets and protecting the citizens and even in front of Comerica Park. Anyone attending the Tiger’s game tonight will be in for a special treat since RoboCop is throwing out the first ball of the game!