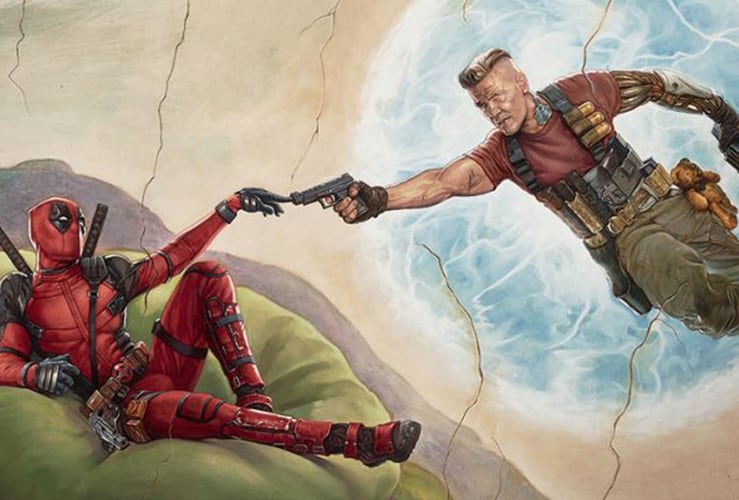 The fourth wall breaking, wise crakin’, walking tumor is still kicking butt and making up names.  Wade and the usual players are back again for more of what you love, Deadpool getting shot, bad guys getting shish kabobed, jokes and disturbing imagery.

The movie hits on themes like family, loss, pop culture, and general mayhem.  Anyone going for a quiet rom-com is going to be shocked to say the least.

The movie starts off in a dark place and kinda picks up from there.  There are some parts that made me get a little misty-eyed, but that is what they were going for.

Pop Culture references, including some about Infinity War will be all over the place.  Honestly, who was not expecting this. Wade is all about talking TO the camera and someone decided to use the same actor (Josh Brolin) to play the bad guy in two Marvel films kinda set things in motion.  There were several instances that had me laughing out loud. The re-generation gag was put to full, and slightly creepy, use.

There are a ton of sight gags in this movie.  The opening credits do not disappoint, but some of the others you will have to look out for as they are only there for a few seconds.  Shockingly, there is even a suprise bad guy.

The new team you see in the trailers have their moment.  Peter and Domino, along with other new recruits. Domino has the ability to influence chance for her own benefit.  Peter is just a guy looking for kicks. Sadly, Bob does not make an appearance. Cable has some cool toys and deals out the damage to the smartmouth Santa.

There are some credits scenes.  One just before and one shortly after they start.  Nothing after the credits end in the media preview.  I laughed harder at the credit scenes than I did the whole movie.  Your welcome Canada.

Overall, as good as the first one.  Definitely worth the watch in regular 2D, no need to pay for the extra D.

I will be adding this one to the shelf.

After surviving a near fatal bovine attack, a disfigured cafeteria chef (Wade Wilson) struggles to fulfill his dream of becoming Mayberry’s hottest bartender while also learning to cope with his lost sense of taste. Searching to regain his spice for life, as well as a flux capacitor, Wade must battle ninjas, the yakuza, and a pack of sexually aggressive canines, as he journeys around the world to discover the importance of family, friendship, and flavor – finding a new taste for adventure and earning the coveted coffee mug title of World’s Best Lover.