Head under water with the DC Super Hero Girls! It’s time for a class trip for Super Hero High and they’re heading under the sea to learn more Atlantis and for a new adventure. Your favorite super hero girls are all there including Harley, Wonder Woman, Batgirl, Supergirl, Bumblebee are in this new adventure focusing on girl power and learning more about working together.

The new movie will hit digital HD and DVD on October 2nd! We’ll have updates as soon as Warner Brothers releases more, but you can check out the trailer and more about the movie below. 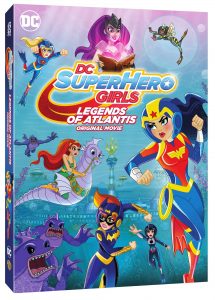 It seems like an uneventful day at school until the powerful Book of Legends is suddenly stolen from Super Hero High. In order to uncover the mystery, Wonder Woman, Batgirl, Supergirl, Bumblebee and the rest of the Super Crew must journey through the depths of the ocean to Atlantis. There, the girls encounter Mera and Siren, the ocean-dwelling thieves, who prove to be a formidable match. In order to recover the stolen tome and return it to its rightful place, DC Super Hero Girls must band together and use their collective powers to successfully get back to land…and back to class!

From Warner Bros. Consumer Products and DC Entertainment, the DC Super Hero Girls universe encourages young girls, ages 6-12, to explore their own powers and strengths through original content, including all-new films, webisodes and TV specials. The franchise offers young fans inspiration and encourages teamwork, friendship and empowerment. DC Super Hero Girls: Legends of Atlantis will connect with fans throughout the world via waves of digital content, including DCSuperHeroGirls.com, the DCSHG App, YouTube Channel and Instagram, as well as a global licensing and merchandising program.